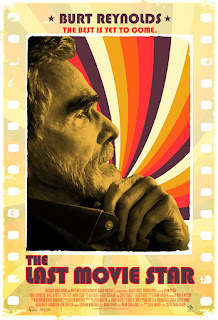 Blogger's note: I wrote this post about Burt Reynolds' last movie back in June. I am glad that he had an opportunity to make it before he died on September 6, 2018. RIP Burt!


I stumbled upon a film on Amazon Prime called The Last Movie Star starring an 82-year old Burt Reynolds essentially playing himself as an 82-year old former film star faded into obscurity. Reynolds character is invited to an independent film festival in Nashville to receive a lifetime achievement award. Upon arriving at the festival and being put up in an Econo-Lodge he discovers that the film festival takes place in a bar and the organizers are two Millennials who really just liked his old films.

The film is interspersed with clips from Burt Reynolds' actual films like Smokey and the Bandit and Deliverance. It was eerie seeing the 82-year-old Reynolds next to his 40-something self on the big screen. Once again I was struck at how much harder it must be for movie stars to face aging while records of their young, attractive selves are out their rubbing their lost youth in their faces.

Critics were not overly kind to the film, using phrases like "overly sentimental" and "strikes a note of banality" in their reviews. I find that ironic. I imagine those reviews were written by people who have yet to face aging. Because aging is fraught with sentimentality and banality. I'd like to revisit those critics when they are shuffling alone in their walkers lost in their own banal existences and getting all misty eyed about when they were once a film critic.

Although, other than Siskel and Ebert I couldn't even tell you the name of another critic. Because they are like ticks feeding on the carcases of the famous.


It's not that I was ever much of a fan of Burt Reynolds. I'll be the first one to admit that Smokey and the Bandit wasn't great art. But I did like Deliverance and the Longest Yard. I also remember seeing Burt Reynolds on the Tonight Show.

But the thing is, I will always remember him as the young Burt Reynolds. Or maybe the middle aged Burt Reynolds from Boogie Nights. Watching him in The Last Movie Star was painful for that reason. The realities wrought by the ravages of time don't sync with the images we have in our memories. It is hard to look at the 82-year-old Burt Reynolds and register that he is the same person who starred in Deliverance.

The same is also true for Chevy Chase who has a brief role in the film as a friend of Burt Reynolds who urges him to go to Nashville and accept the award. In my mind's eye he will always be the bumbling comedian on Saturday Night Live in the late 70s or Clark Griswold in National Lampoon's Vacation movies.

Psychologically, it seems like celebrities go from young and beautiful to these unrecognizable parodies of their former selves overnight. It's because we mainly see them at the peak of their careers and then they drop off the radar and reappear years later.

Again, I don't envy the famous having to endure people judging them for aging. Other than paying the price for over indulgences and not taking care of themselves at times in their lives, no one should be judged harshly for aging.

At least no one really pays attention to me aging and there are very few photos of me as a young man. So I can be as sentimental and banal as I want to be.
Posted by Time at 3:03 PM