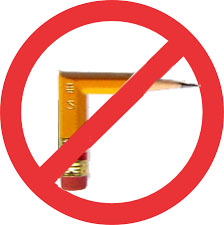 It gets harder and harder to find a play on words that is unique or at least hasn't been used by umpteen other people. The write stuff, write on, two wrongs don't make a write and divine write were all used to death. So I had to settle for "No write turns." It only showed up in some posts about typos.

Not that "No write turns" makes any sense. But at least it is now uniquely my play on words. I suppose it could have some political ramifications as in don't turn politically right when you write.

Yeah, that's what I was going for.

My son is quickly learning the lesson about the shortage on original thought, too. Yesterday he was excited because he thought he came up with the phrase "Are you kitten me?" Then we Googled it and found there were thousands of uses of the phrase including on t-shirts and coffee mugs. They even took it to the next level with "Are you kitten me, right meow?"

Oh well, it is better to crush his creative spirit at a young age than to have him get to my age and realize the best you can come up with is "No write turns." I've had my share of heartbreaks with word play, mind you. My kids were playing at a school playground a few weeks ago and were climbing on the monkey bars when I had this cool idea for a bar called the Monkey Bar.

Hundreds already exist, including photos of monkeys drinking at a bar.


I had this idea years ago for a florist/gun store called Guns and Roses.  Sure enough, a florist has cropped up in Ireland called, "Guns and Roses." But they only sell flowers. Tell me how that makes any sense?

Let's not forget the plethora of French restaurants called, "French Kiss" (I wonder if they have a little tongue on the menu). And although some reviewers use the phrase, "Pizza of the Action," I can't find any pizza places with that name. There are, however, lot's of "Tower of Pizza" restaurants and quite a few "Leaning Tower of Pizza" places. And although there aren't any "Pizza of Mind" places there is a "Pizza Mind" restaurant.

As I suspected, there is also a bunch of window washing businesses called "Pane in the Glass." There are also a few "Pain in the Glass" window businesses as well. And there are several "Pied Piper" plumbing businesses. I couldn't find any "Take No Crap" plumbers, so that's up for grabs. There are, however, a few "Down the Drain" plumbers (which gives you an idea where your money is going when you call them).

For some reason I feel so drained after writing this post.
Posted by Time at 3:10 PM