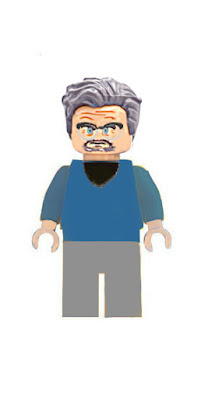 I think having a Lego minifigure of myself would be kind of cool. And I imagine you could pay to have one made, but it wouldn't be the same as actually being a bonafide minifigure. Because it isn't really an authentic minfigure unless Lego makes a shitload of them and people want to collect it.

So I'm just putting it out there to Lego and the universe that I would make a pretty bitching grumpy old man minifigure. I would be the perfect addition to your Lego town. My minifigure would be yelling at kids to get off his lawn or yelling at the neighbors to stop setting off fireworks or he would call the police.

If my father had had a minifigure, his would have been yelling at the neighbors not to race up and down the alley on their motorcycle. That was his grumpy old many gig. I don't have an alley so I don't yell at motorcycles too much.

But I suppose there really wouldn't be much of a market for a grumpy old man minifigure that looks like me. I seriously doubt that even my kids would want one. They see me all the time anyway and think minifigures only exist for superheros and famous people.

So you see my kids  wouldn't see the point in a minifigure of me.

But I still think it would be cool.
Posted by Time at 3:06 PM