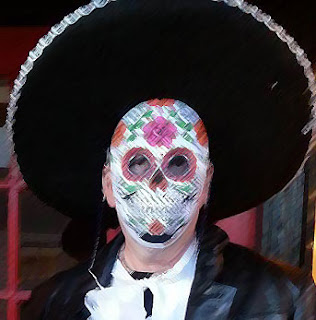 I thought about reprising my post about one of my favorite songs of late (Wolves by Down Like Silver,) but no one seemed to pay much attention to that post (which is a strong indication that no one cares what I listen to on Pandora...though it is a great song). But the songs I've been drawn to of late seem to indicate that I'm more aware than normal that my bones are weary.

I will note here that there is an indie alternative folk trio from Longmont, Colorado called "Weary Bones." But I am referring to my actual weary bones both literally and figuratively. The weary bones in my hands I attribute to the amount of yard work I've done in the past few weeks. The weary bones in my legs and feet I attribute to the 5k run I did with my daughter last Saturday that I didn't know I was going to participate in until the morning of the race (long story).

The general, overall weary bones I'm experiencing I attribute to aging. And when I stepped off the elliptical machine this afternoon it dawned on me that that aspect of my life isn't going to change. It's where the trite old saying, "I ain't getting no younger" comes from.

I don't know why that should be such an epiphany. We're born. We get older. We die. It's a given. Yet we, or at least I, hold out hope that I'll be the exception to the rule. That I'll wake up one day and my bones won't be weary. My hair will be brown again and my face will match the mental image I'm staring out through.

Maybe that is where the myth of heaven comes from. You imagine that when your spirit leaves your body you glide into the light and are reunited with all of your friends and family who passed before you. I guess I just have always fantasized that I wouldn't have to wait until I died.


It's this concept that I can't quite shake that the past, present and future will merge. That something is there on my periphery, waiting to tell me that death really is an illusion and that my now is no more real than my then. Or for that matter, my there.

I've been watching this movie on Netflix called, Singularity.  The plot revolves around a future where a genius creates an Artificial Intelligence that surpasses human intelligence and is asked to solve all of the problems of the world. And unlike the super computer in Hitchhiker's Guide to the Galaxy who is asked what the answer to the meaning of life is and comes up with "42," this AI determines the solution to all of the world's problems is to eliminate mankind.

Of course the plot centers around the few survivors who hide from the robots and seek out a Utopian place where the humans still thrive in peace. But the problem is that the few survivors also continue to exhibit the worst of human behaviors and prey on each other instead of uniting against the machines. Why is it that all apocalyptic disasters seem to bring out the worst in human nature?

In truth, Singularity isn't a very good movie. The acting is stilted and force. John Cusack just doesn't cut it as an AI supreme being bent on mass destruction. But the movie theme still strikes a chord of truth. Humans are their own worst enemies. And we create the illusion of gods to blame for, and solvem the problems we create.

And what does this have to do with my weary bones and my self-delusion that aging, and eventually death, are someone else's problem?  Well, I'll just answer with lyrics from the other song I really like (Carry Me Home by the Sweeplings):