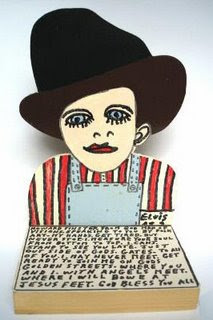 I like to own original art. Unfortunately, I can't really afford to own much original art. The second best thing for me is to own signed and numbered prints. At least then I know the original artist put his or her mark on it.

I just purchased an ORIGINAL Howard Finster work of art that is also signed and numbered. So I am pretty jazzed about that. Plus the subject is Elvis at aged 3.

Alabama born Howard Finster died in October 2001 after creating 10s of thousands of original artworks inspired by god (though many of the subjects were Elvis and Coca Cola). When Howard died, he was living at his four-acre Paradise Gardens in Summerville, Georgia. The place was an artwork in its self.

Howard apparently was recruited by god to paint sacred artworks. Most of them include Biblical quotes or references to Jesus. Mine says:

ELVIS AT 3. HOWARD FINSTER. FROM GOD MAN OF VISIONS. SPEAKING TO YOU BY FOLK ART- MY HANDS. GET TIRED. BUT NEVER STOP. I. MEASURE YOUR SOUL FROM BOTTOM TO TOP. I. CAN.T. STAND TO SEE YOU LATE. JUST OUSIDE OF GODS. GATES. TO ALL OF YOU. I. MAY NEVER MEET. GET READY TO JOION ME ON GODS GOLDEN STREETS. WHERE YOU AN I. WITH ANGELS MEET. WHERE I WILL BOWE AT JESUS FEET. GOD BLESS YOU ALL.

I don't know why god didn't help Howard with his puncuation, but his message is pretty clear.

Anyway, I first discovered Howard Finster during my Elvis years. I was pleased that Howard considered Elvis sacred enough to paint (he painted a few Marilyn Monroe's as well). At one point he created album covers for REM and the Talking Heads. Coca Cola also commissioned him to paint a giant Coca Cola bottle for the 1996 Olympics.

I unfortunately didn't discover Howard in time to meet him or buy one of his works in person. But that is what is cool about eBay. You can buy anything. And there was something that drew me to this piece. So folks, you are looking at one proud owner of a Howard Finster original. 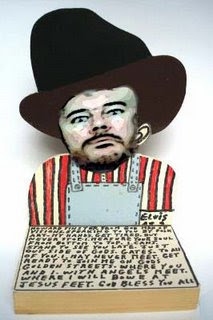 Congrats on your new purchase.

Very original and I am happy you enjoy it!

Thanks Cherish, It has a proud place with my Elvis collection.

THE Michael, I knew you would appreciate folk art.

I like the new improved version better. I wonder if we looked over some of our more famous masterpieces, if we just might find your face hidden in them. For instance, I never knew until you pointed it out to me, just how much you have in common with the "girl with the pearl earring". You just have one of those faces Tim.

What can I say? My face is a masterpiece only a mother could love.

Did you ever visit the 24 Hour Church of Elvis in Portland? I don't know if it's still there, but I spent a quarter there once, which was the price Elvis charged for working a miracle. Your art reminds me of that Church...

Kristy,
I never went there, but I had a t-shirt from the place.

And bless you Gina for stomaching this many of my posts at one sitting.