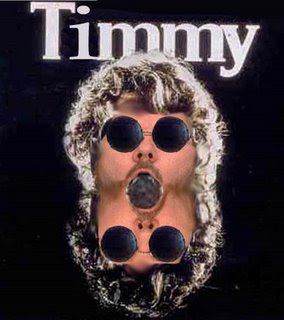 I was sitting on my exercise bike this morning going nowhere and flipping through television channels trying to find something to watch that would take my mind of the pain of exercising. My primary complaint about satellite and cable television is that no matter what time you randomly turn on the television, odds are you will only be able to watch programs that started at least 20 minutes ago.

When I tuned to it, Anne Margaret was just giving birth to Tommy while twin nurses sang in unison, "It's a boy Mrs. Walker, it's boy."

I like the Who and I like the Rock Opera, Tommy. But I had forgotten how bad the movie adaption of the Rock Opera was. It just has scene after seen of random weird ass stuff that is even a bit bizarre for me. The scene I've never really understood is one where Anne Margaret is rolling around in a room filled with what appears to be pork and beans. She seems pretty into it, too.

But weird as the movie is, I still like the music even though many of the lyrics are politically incorrect ("That deaf, dumb, and blind kid sure plays a mean pinball."). Tommy wouldn't be the same if Pete Townsend had chose to use politically correct terms like "That hearing impaired, speech impaired and seeing impaired person sure plays pinball well."

If you don't know anything about Tommy, it is about a boy who witnesses his mother and her new lover kill his father who was presumed already killed in World War II. The boy, Tommy, is told that he never saw anything, he didn't hear anything and he won't ever say anything about it. He becomes deaf, blind and mute. Eventually he connects with a pinball machine and becomes a pinball wizard or champion and makes major bucks.

It's no DaVinci Code.

But the movie does have musical performances by Elton John, Tina Turner, The Who, and Eric Clapton. One of my favorite songs from Tommy is See me performed by Roger Daltry. Tommy sings plaintively, "See me, hear me, touch me, feel me."

Which is pretty much how I feel about blogging (at least the see me, hear me part). 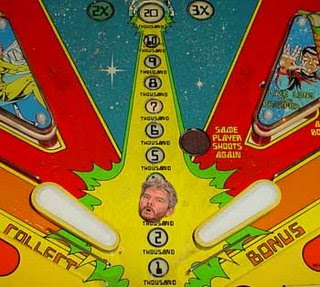 I've stuck with the sound track, the movie was too awful.

that said, you do a more convincing job of the "see me" bit in blogging than anyone else I've found.

What you see is what you get. BTW, When do we get to see Jake?

first I had to learn that the software doesn't work on the apple because it said it doesn't need software.
last night I found the cables but wasn't able to download. there are oceans of distance between your casual photoshopping and electronic comfort and my bumbling.

when I started blogging I thought knowing how to type and string words was enough.

Then there was "SGT Peppers Lonely Hearts Club Band" as played by the Bee Gees. Music wasn't that bad if I remember right, which I rarely do.

I actually have the soundtrack from Sargeant Pepper's. Movie sucked but the music was okay. It even had a version of "Got to get you into my life" sung by the late Billy Preston.

I do the same thing when i'm on my eliptical trainer... flip, flip, flip. I've never seen that movie, but must say i'm curious now and might just have to see if i can find it at the video store. Thanks Tim.
Hugs,
gina

Gina, It's a good exercise movie. Odd, but distracting :)