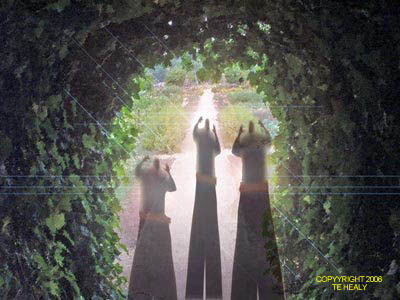 I would like, if I may, to take you on a strange journey.
-Rocky Horror Picture Show

I suppose life would be simpler if our paths were always clearly defined or we always knew where we were headed. But then again, we might not choose to travel the paths if we knew where they were headed.

More often than not, however, there are many paths before us. But once we set foot on one path, they merge and the only way to progress is keep moving (though human nature dictates that we worry about whether or not we chose the right path).

When you are young and just starting out on the path, it seems endless. Wandering off the path didn't seem to matter. There was plenty of time. But the path gradually begins to narrow. It also becomes steeper and steeper. You find yourself locking into career choices and obligations. You buy houses and cars. Wandering off the path stops being an option. So you continue to climb.

As you approach the summit, you hope for relief. Then boom, you are headed down the slope and picking up speed. It's times like these that you start wishing you had had the brakes checked regularly, because they don't seem to be working. And I'll be damned if there isn't what appears to be a cliff within sight at the end of the path. Or is it a gate?

It seems logical that being middle aged is a time of doubts. You know where you've been. And with the realization that time is running out, you begin to wonder about the feasibility of many of those dreams and aspirations you had when you were staring at the summit. For me, it is also a time to wonder about those skills and talents that I assumed I had in my youth, but now seem less than stellar in the eyes of others.

A couple of years ago, I read a book I found in the library on a cruise ship. It was about all of these people who really didn't achieve major life accomplishments until they were in their 50s and 60s. The book talked about major scientific discoveries and career changes. So I suppose there is hope for me.

All I have to do is keep moving down the path. And maybe that is a gate at the end. But I imagine that if I open it, I'm likely just going to find another path.

Ever notice when you are wrapped in one of those foggy days, whether in your car or walking, that you can see only so far ahead, no matter how far you walk or drive, the view in any direction gradually obscured? I have reached that point in my life. I have to admit that most of the fog is of my own making, but there are so many forces at work against me these days, it seems hopeless to try and pierce the fog, for fear of what might be revealed. This so-called "middle age" sucks......maybe finally being able to call myself elderly will be a relief.

THE Michael, I figured you'd understand what I was talking about. Thanks.

My birthday is coming up. I'm trying to avoid any philosophical musings related to aging. It's getting a bit harder with each passing year.

Kristy, Was I talking about aging? I thought it was about hiking. No wonder no one wanted to comment.

Tim,
Lights and I have been trying to post comments now for two days (unsuccessfully).

I had a well thought out comment that was lost when I hit publish.

It was something about how I'm just starting to peak over the top, got scared about falling down the other side and so have been running around in circles at the top.

Before I go and try to hard, I'm going to see if it publishes.

Whoooo hoooo!!!! it went on

But back to the path...you actually are too young to have reached the peak. So you were ahead of your time and need to run around in circles before you start the downward descent. Don't worry, though. You may feel like you are falling, but flap your wings and you just may fly.

That was just brilliant Tim. You hit the nail on that one. Yes, I think I feel as though I've peaked way too soon. I have had more than a couple of people tell me that I have a desperation about me, something about outrunning old age. I strive for new adventures as a means of staying young. It tends to make others nervous because I have not yet accepted things and found a peace within me yet.

humm. I can't bear feeling static. I spent some static years during my middle years... climbing, climbing, thinking that's where I wanted to be.

then I closed my eyes and jumped. now I'm just trying to get back to feeling like "me," which means trying new paths, exploring life, enjoying the ride. And changing my priorities every time I lose interest in the old ones. It doesn't mean that the old priorities were bad, just that the buzz is worn out of them. I don't think of it as trying to "stay young" but as enjoying change and new adventures.

I like the idea of roots but not enough to stay put in one thing. I've been through quite a few career changes, and each one seems to deepen my vision. For me, transformations seem to take 5 to 10 years if they are big ones, but when I look back I can't believe the differences, the distance. And though sometimes I've been apprehensive about stepping off of the clif to move forward, I haven't yet looked back and regretted it.