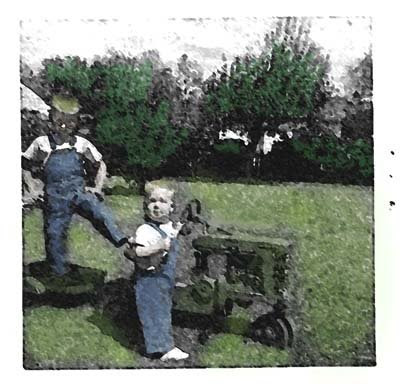 I grew up in Idaho, but I didn't grow up on a farm. Lot's of people have that misconception about states like Idaho. They assume that if your potatoes are famous, you obviously were somehow raised with agriculturally roots (or tubers in the case of Idaho).

Also, for the record, Idaho potatoes aren't much different than Washington potatoes. They just have a better press agent. I never thought much about potatoes growing up other than to wonder why our potatoes were famous. When I became a teenager, I learned to tape over the "atoes" part of the "Famous Potatoes" on our license plate.

I actually grew up in a suburb of Boise. Oh, it had once been farmland. My backyard had once been part of an orchard and my grandparents had raised chickens, including capons (surgically altered chickens who were sterile, but grew quite large). But it wasn't a farm.

I do know that there is nothing romantic about being a farmer or growing up on a farm. It is hard work. It is also by necessity a cruel life. You learn not to grow attached to animals. I never wanted to be a farmer.

My best friend in grade school did grow up on a farm. It wasn't that far from my house. It was a dairy farm. I actually helped him hook cows up to milking machines a couple of times. I stopped when a cow stepped on my barefoot in the milking barn. It turned its head and stared at me dumbly in the way only cows can as I screamed (more in fright than in pain...the floor was thick with cow dung and it cushioned my foot). The cow stood there chewing its cud and enjoying the show for about five minutes until my friend convinced it to move its foot off from mine. It responded by lifting its tail and adding to the dung piles on the floor. Cows are very basic creatures without much of a conscience. I remember this incident when I order prime rib or don my leather jacket.

There were perks to growing up in an agriculture state. I got my driver's license when I was 14. Law maker's in Idaho wanted to accommodate the needs of farmer's who needed their teenaged sons to drive tractors. I never drove a tractor. The first car I drove was our family's 1967 Bel Air Chevy that was the same color green as the milking barn floor on my friend's farm. The second vehicle I drove was my dad's 1972 Chevy pickup. My 81-year old mother still drives that truck.

The first time I ever really left Idaho (other than quick trips with my parents across the border to Oregon to buy things and avoid sales tax) was in 1973 when my high school band flew to California to play at the half time of a then LA Rams game versus the SF 49ers. I was 15. It was my first time on an airplane, my first time staying in a hotel without my family and my first time to really experience how the rest of the world viewed Idaho.

We were standing in line at a television studio waiting to go watch a taping of a Bobby Goldsboro Show (very few of you will have a clue who that is, but trust me he was kind of cool in 1973). One of the studio pages came out to lecture us on how to behave and lead us into the studio. He shouted out, "Come on Spuds, let's go." I knew then I needed to get out of Idaho.

There is no such stigma about Washington State. Oh, you get the stupid rain jokes. And you have to endure the rantings of Washington "Natives" (not to be confused with Native Americans) telling you how great the state was until all of those Californians moved in. But I can pretend to be a native Washingtonian. I nod when people talk about JP Patches (an obnoxious clown who hosted a local children's television show). And I pretend to remember long dead Ivar Haglund's folk singing on commercials promoting his touristy seafood restaurants on the waterfront (he was alive when he did the commercials).

But every now and then I hear a television jingle in my head that was recorded long ago in Boise, Idaho about a product I believe was made out of potato byproducts:

And when I hear that jingle in my head, I get a little misty about my Idaho roots and I tell myself, "Thank god I'm not a country boy and got away. "
Posted by Time at 6:30 AM

I know what you mean about hearing the advertising jingles from when you were growing up. Whenever I see a Redskins or Orioles game on the satellite I get to hear the comercials from those areas. Some of the businesses are still using the same jingles from 20-30 years ago. It's very cool to hear them again.

I too have adopted Washington as my home state ... and, considering I've lived here 29 of my 40 years, I think it's fair to say I'm a Washingtonian! But, I too wax nostaglic from time to time about my east coast roots.
By the way, love the pic!

You need to thank Bob you didn't grow up in civil rights era Mississippi, then went away and had to hear what enlightened, educated and un-redneck people thought of that place. I didn't need to be reminded why I was happy to get the fuck out of that Bob-forsaken third world place. It took me forever to lose my accent, and until I did, it always seemed to me I was thought of as some kind of aborigine........

Lights, you know what they say, "Jingles ring bells."

Welcome Jane Poe (aka Deborah), You have me beat. I've only lived here 26 years. Glad you liked the photo. It was the closest I ever came to driving a tractor :)

THE Michael,
Hillbilly Bread beats the heck out of Dairy Snow from Idaho.

Having lived all but 7 months of my life in California, I was unaware of exactly how the rest of the world saw californians. Now, I can't seem to get away from the hateful stereotypes. Yes, it is true... every single one of us are potsmoking, gay, liberal, wealthy, silcone injected, yoga obsessed, snobby assholes.

But we have happy cows that make happy cheese and our oranges are just as good as Florida's.

By the way, I did grow up on a farm and even worked in the potatoe sheds.

Shandi, Spoken like a rare native Californian. Actually I think the majority of people exiting from California into neighboring states started out in other states to begin with. But for the record, I think you are pretty okay for a Californian....and a potato farmer.