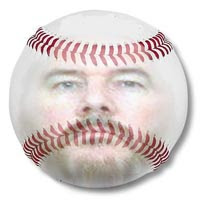 I am not really much of a baseball fan. I didn't grow up glued to the radio or television listening to baseball games. Oh, I played baseball (or our version of it in the backyard). But I can't quote any statistics and I barely know who Babe Ruth, Willie Mays and Hank Aaron are. So suffice to say, mystical analogies involving baseball aren't my forte (I did see Field of Dreams, however). This is my disclaimer about yesterday's photo from Saturday's Mariners game. I simply thought it was a cool photo.

I am not dissing America's pasttime, either. I am lucky enough to live in an area that has a professional baseball, football and basketball team (most of them owned in some way by Microsoft billionnaires). We also have a racetrack, a hockey team and a soccer team. It is a varitable sports mecca.

Yet still, I remain relatively ignorant of the nuances and mechanics of most sports. I attend almost purely for the spectacle of observing professional sports and professional sports' fans. If watching gladiators and feeding various religious groups to the lions was still politically correct, I would probably attend those events as well. I just might pay more attention to what is going on in the arena rather than focusing on ordering pizza and beer.

Ironically this all meshes with my acknowledgement of my mediocraty as well and my standing as a nondescript middle manager. I have very little extensive knowledge of anything. But I am a warehouse of information about the vagarities and generalities of many things. I am very astute at nodding at precisely the right moment in an indepth conversation focusing on subject matter I am not well versed in. I wholeheartedly subscribe to the philosophy that the key to relative success is sincerity and that once you've learned to fake it, you have it made. 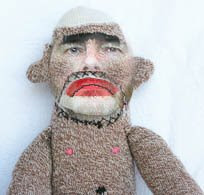 Oh, sometimes I envy those people with obsessive passions such as sock monkeys and law enforcement spokespersons. But more often than not, I find peace in my lack of passionate obsession with any one sport or pasttime. There is a certain sense of freedom in not knowing much about anything.

And before someone mentions obsessively Photoshopping my face on various animate and inanimate objects, I will premptively cry out, "That doesn't count." It is more of a mild mental aberration than an obsessive pasttime.

Plus I can stop any time I want.

Does that sock monkey have nipples?

Lights, Yes, and I am very disturbed that you would notice and point that out.

By the way, people who do follow the passions you've listed as "random" samples, they at least don't lead their lives under soggy black clouds of middle management angst.

Mine is a happy, simple world!

Kristy,
You would have to provide a sample sockmonkey with a unibrow and nipples. I'm beginning to think it is sending out the wrong kind of message.

And I have no middlemanagement angst. That would require thought.

Having failed miserably at becoming the leading authority on any one thing in particular, I have happily settled for knowing at least something about everything, except, perhaps, the Kama Sutra, which requires flexibility, which both I and the wife ran out of years ago. I also gave up on football, when it became apparent a team could up and foresake the city it was created to represent. Just you wait; the Yankees may well end up one day in St Louis, which side of the state line depending on the highest bidder. When everything has it's price, nothing has any value. As far as sock monkeys are concerned, I do know that they are an invasive species and must be exterminated. (The Dalek behind me made me say that, but I agree with it)

THE Michael,
Sports teams come and sports teams go, but the price of beer and a braut remain extremely high. As for the sock monkeys, well darn them anyway...heh,heh.

"Sock monkeys are an invasive species and must be eliminated"????

War, huh? You got it, sister! I'm preparing a test flight this very moment with a ballistic anti- sock monkey bottle rocket.......and it's not made in North Korea!