A lot of bull 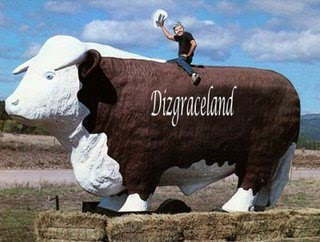 Do a Google search on "John Wayne's colon" and you'll find various "facts" stating that John Wayne's colon weighed between 40 and 82-pounds when he died due to everything from eating beef to consuming Herve Villechaize (the little person who played tattoo on Fantasy Island...okay I made that part up). What a load of crap. There was no autopsy performed on John Wayne. And it is physically impossible to have 40 pounds of anything in your colon even if it is impacted.

Thus is the danger of the Web and Web searches. Any idiot, including myself, can spout something as fact on the Web. Then someone else does a random search, finds the information, posts it on their blog and you have a documented "fact." It's the same way Urban Myths are hatched.

Believe it or not, I'm here as a voice of reason urging you to verify anything you find on the Web with several sources before you spout it as fact on your own Web sites. And if something is your opinion or heresay, label it that way. Writing isn't just recreation. It carries with it responsibility.

I realize this is odd coming from me, but I've spent months believing the Duke walked that way because he was carrying 80 pounds of beef around in his colon. I even suggested to a server at the local Claim Jumper that they name one their mega meat entrees the "John Wayne's Colon Plate."

Now I know why she looked at me funny.
Posted by Time at 9:14 PM

Uhm, T...anyone would give you a vapid stare if you suggested naming menu items after people's southern organs. I like this particular blog entry because if one is going to be so bold as to try to pass off urban legend as fact (on the world wide web) then they prove it is possible to "talk outta yer butt."

Ok, that explains why the waitress looked at you funny. Now you just have to figure out why all those other people look at you funny.

Miss Bliss, I can see I'm going to be the butt of many jokes for this post. But that aside, what the Web does need is a enema. :)

Lights,
Something tells me you are no stranger to funny looks. And I prefer to think all of those other people are staring at me in awe.

Ughhh... i have a stomachache now. That just provoked yukky thoughts.

Sorry Gina, But think of the bright side. John Wayne didn't have 80 pounds of undigested beef in his colon when he died. :)

And all this time I thought he was simply bow legged......

I always take anything I read on the net with a little salt....and pepper.....maybe some parsley......

arrrghhhh. I was going to "weigh in" but there's such a load already that I think.... maybe not.

Oh come on Hayden. You know you want to.

What ever would have inspired you to give so much thought to John Wayne's colon that you would have done a web search on that topic?

Kristy,
I wouldn't go so far as to say I was inspired. I had just heard the "fact" bantered around by vegitarians to illustrated the evils of eating meat. Let's just say I was curious. I could tell you what Elvis had in his colon when he died, too, if you are interested.