Third eye wide shut or salute to the pineal gland 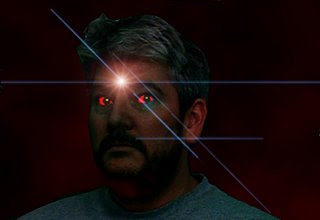 "Man, I'll try just about anything, but I'd never in hell touch a pineal gland. "
--Dr. Gonzo, Fear and Loathing in Las Vegas

I've never really given my pineal gland much thought before I started writing this post. It is a small gland (about the size of a pea) located in the center of the brain. Being a gland, I always assumed that it secreted things. And I don't associate pleasant images with the word "secreted." It is right up there with "ooze." It conjures up images of slugs and poisonous toads "secreting" vile liquids.

The pineal gland's job, however, is to produce melatonin. The production of melatonin is inhibited by light and stimulated by darkness. Thus melatonin

is apparently known as the "hormone of darkness." This would make the pineal gland the "Gland of Darkness" which would be a bitching name for a comic book anti-hero.

Near as scientists can figure, melatonin plays some role in our sleep patterns. You can take melatonin tablets to help control jet lag or other sleep deprivation problems. Anyway, the pineal gland works the night shift producing melatonin. It goes to work when the retina sends a signal that it is dark out.

It was only recently that scientists figured out what the pineal gland actually did. Brain surgeons apparently kept poking it with a needle and asking each other, "Hey, what does this thing do" for a long time before they figured out the melatonin angle. Before that, people like Rene Descartes thought the pineal gland was the "seat of the soul" (which would have ment our souls are the size of a pea). And to this day, some mideastern philosophies associate the penial gland with the elusive "sixth chakra

Growing up, I would have associated having a third eye with being a Martian like one of my Aunt Gladys' kids. But on a more spiritual level, the third eye is how we focus on the spiritual world (i.e. elightenment and psychic visions). It has been speculated that, in addition to melatonin, the pineal gland may also cook up another substance known as dimethyltryptamine or DMT. DMT may be responsible for our dreams. Ingested in larger doses, it can cause hallucinations. I think the pineal gland makes and takes DMT to stay awake at night while it is making melatonin. This is just my theory.

Anyway, all of this makes me respect my pineal gland. It is a highly underrated gland that definitely doesn't get the press it deserves. I would suggest that before you go to sleep tonight, you stop and thank your pineal gland for regulating your sleep patterns with melatonin and urge it to knock itself out with the DMT production. Because such stuff are dreams made of.
Posted by Time at 11:17 PM

So I looked up this stuff and it turns out that 10% of people who take it as a supplement experience side effects such as nightmares, headaches, morning groginess, mild depression, and low sex drive. Oddly enough those are the same effects experienced by 50% of people who read the Monkey playing cymbals blog on a regular basis. This verifies my suspicion that the Monkey playing cymbals is, in fact, the size of a pea and also, that he secretes many vile substances.

Nevertheless, it is important to recognize the the contribution of the pineal gland and it's helpful secretions and finally give it the praise it is due.

Lights, my simple friend, I'm assuming you are talking about Melatonin. I didn't mention that melatonin is produced at much higher levels until you reach puberty. Until that point, it does act as a natural depressant of sorts for the sex drive. So that would explain the side effects of low sex drive (and conversely depression).

I will be the first one to agree with that the monkey is a source of seemingly neverending vile substances. But the same could be said of most people who blog.

I will be the first person,

sounds like the musings of someone who couldn't get to sleep last night....

After reading this I felt like I had just poked smot. Thanks for the drug free afterglow....

Hayden,
On the contrary, I slept like a baby, at one with my pineal gland, safe in the knowledge that it takes care of me.

Miss Bliss, I like to think that I have heightened the awareness of the many people out there oblivious of the little chemical lab inside their heads.

Your writings make me feel like a little petri dish...I just never know what will grow on me.

I'm pretty sure Photoshop has a feature that will help solve the red eye problem. You should check it out.

Thanks Kristy, I used some Visine with melatonin and it worked like a charm.