Wake me if I have an epiphany 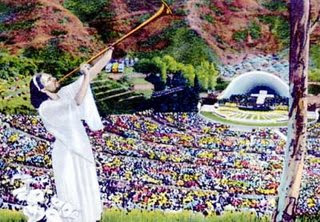 I'd kind of like to think of my life as one extended epiphany. But I suppose that would contradict the true definition of the word as a "sudden realization" of the meaning of something profound.

Back in college I had an epiphany about what made bread rise and toast crunchy. I was quite proud of the insight for the 30 seconds I was able to retain it. Then I returned to staring at my lava lamp.

I've always thought that Epiphany would be a great name for a baby girl. "Hey everybody, we just had an Epiphany!" But then, as a father, later in her life I would never want to here anyone else saying they had had an Epiphany.

I tend to believe that epiphanies are kind of like computer programs running in the background of our brains processing data we've been feeding it over time. When the program reaches a conclusion, the answer pops into our consciousness and boom, we have an epiphany.

In Zen, the moment of comphrehension or awakening is known as kensho. It is often induced through meditation and focusing on koans -- Zen riddles such as "What is the sound of one hand clapping?" The intent is to have a kensho moment that is presumably a bit more profound than what makes bread rise and toast crunchy. But the mind rush is very similar and you hopefully retain the knowledge longer than the epiphany I had in my college dorm room.

My problem with the Zen approach to kensho is that I think ephiphanies should just sneak up on you. You can't throw your own suprise party if you catch my drift.

I think I just had an epiphany!

It felt good, but for some reason I feel like smoking a cigarette.
Posted by Time at 12:10 PM

I love epiphanies, especially those obtained while looking at lava lamps.

Shandi,
Oh wow, that is so cool...uhhhh.I forgot what we were talking about...:)

I named my first kayak Epiphany. For the period of time I was engaged in kayaking, it really did turn the meaning of my life into something entirely different, and the primary sensory experience I craved was simply the weightlessness of floating.

Hayden, There is something very Zen-like about kayaking.

Tim, you should totally see this song i'm listening to.

I think I'll go make myself a piece of toast.

JanePoe, I sometimes get the munchies when I have an epiphany, too!

Epiphanies are wonderful. But I normally end up obsessing over them and wondering why I was so dense to miss it in the first place!

Cherish, If you start feeling like that, think of my computer analogy. I believe the epiphany comes when we need it and are ready for it. We will have no epiphanies until it is time :)