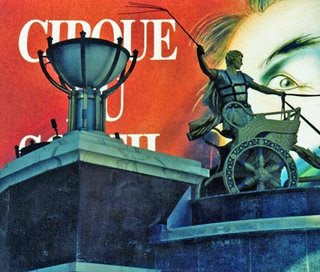 I find it ironic that I took this photo years ago in Las Vegas outside of Caesar's Palace. I was struck by the juxtaposition of the chariot with the giant eye staring down from the ad for Cirque De Soleil -- the Sun Circus. I think it is a pretty cool photo even if I do say so myself. Anyway it obviously reminded me of the song, Swing Low, Sweet Chariot.

Former slave Wallis Willis' inspiration for the spiritual, Swing Low, Sweet Chariot was the Red River. It reminded him of the River Jordan and the Prophet Elijah being taken to heaven via a chariot. Incidently, according to the Old Testiment, Elijah wasn't actually taken to heaven. He was just being transferred to another of god's assignment to condemn the wicked King Jehoram of Judah in another part of the country. But I'm not going to quibble here over biblical facts here. Suffice it to say, Elijah was carried off in a chariot pulled by horses of fire. That in itself is pretty impressive.

Maybe it is because I work promoting public transit, but I am struck that throughout the history of man, gods have employed high-occupancy vehicles to transport souls around. In Greek mythology Charon, the ferryman of the dead, transferred souls across the River Styx (not the rock group, but I think that is where they got their name) to the underworld or Hades via a barge. As with modern day transit operators, I believe he required exact change. Passes weren't valid since you theoretically only made the trip once.

And let's not forget Soul Train. Wait, that was that Don Cornelius R&B television show from the 70s. It was a hell of a show though.

Trains would be a pretty convenient way to transfer people into heaven or hell. I'm actually convinced that tunnel people describe in the near death experiences is a subway. And the light you are supposed to walk into has a turnstile at the end of it where you had damn well better have a token ready to get through.

I don't think the gods ever use buses to transfer souls. Nobody would ride them then either.

And what about SUVs? Well they all have four-wheel drive so the owners don't have any trouble going to hell.
Posted by Time at 12:38 PM

The highway to hell should always be driven in a 69 Mach One Mustang. The damned should accept no substitutes!

THE Michael, Okay, a 69 Mach One to hell. But what vehicle takes you to heaven? Just tell me it isn't a Mini-Cooper.

humm. well the coins to get in would be there if we still buried people with gold coins over their eyes. somewhere there is probably a swarm of souls waiting to cross over but without a penny to their names. I guess you should plan to take some of it with you after all.

Hayden, You have hit on a genius idea: transit tokens for the dead. We can call the company "Pay when you go." I love it. Since you inspired the idea, I'm going to let you get in as an investor on the ground floor. We are going to be rich.

Oh...kick a social service while it's down. Hope you can find parking in the next life.

Magic carpets, chariots of fire, a piggyback or a pump on the back of your best friend's bike in summer. Whatever mode of transportation you use, it should just get you there. I have found that oftentimes it isn't how you get there, but what you do when you arrive. Sometimes I feel like I'm already there.

T, as always, your writing evokes thoughts of the nostalgic kind. When I grow up, I want to write like you.

Miss Bliss, Walk into the light. Exact change please. And thanks for riding Dizgraceland Transit.

I thought a train going into a tunnel signified copulation.

I guess you really plan to enjoy the afterlife (wherever the train takes you).

Iridethebus,
The French definition for orgasm is "the little death", so maybe you are onto something here. But then again, I ride a train and you ride the bus.

I think an escalator to heaven would be cool. But it'd screw up that Zeppelin song.

Lights, Escalator to Heaven? People would problably just stand on it the way they do at airports.