Balls: Don't go near the Alley 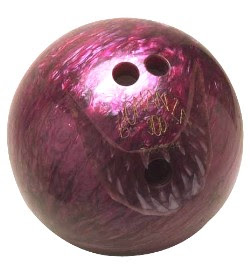 Tess and I were invited to a bowling party last night. It is apparently the trendy thing to do these days. Make it a combination bowling/karaoke party and you pretty much know you are going into something very wrong right from the get go.

I don't know about most people, be we bowl maybe once a year and only when we are invited to a bowling party. So I don't exaggerate when I say I suck at bowling. I know everyone says that and then get all competitive when they slip on the old bowling shoes and start tossing balls. But I mean it, I really suck at bowling.

First, it affects my brain. For some reason , the minute I set foot in a bowling alley, I revert to my 14-year old self and start telling "ball" jokes. I mean, how many times can you say, "Stop touching my balls" or "I hate playing with other people's balls" and not be branded a social leper.

But let's face it, bowling is all about your ball(s). And not being a "bowler" I don't own a bowling ball and am at the mercy of the house balls (I'm sorry, but that just cracks me up). So after slipping into your rental shoes (and I'll spare you the stale bowling shoe jokes) you spend half an hour trying to find the right ball, shoving your fingers into holes where thousands of people bowl have shoved their fingers after using the stainless steel trough urinal and playing pulltabs. I'm not even a germ-a-phobic person, but this grosses me out.

My main complaint is that I never really know what to look for in a bowling ball. Should it be light or heavy? Should my fingers slide easily in the holes or should they fit snuggly (regardless, for some reason the house balls always seem to be drilled with finger holes only ET could use). Finally, what color ball should you bowl with? I refuse to bowl with a pink ball. And blue balls set me off on a whole other set of sophmoric jokes that I can't control. So I generally try to find a simple black or burgandy ball.

So we take our balls to our assigned lanes and spend another 20 minutes trying to program the computerized scoring machine with clever names like Pinhead, Alley McBeal and Guttermouth. Finally the humilation begins. Traditionally, my first ball is always a gutterball. I generally follow this with another gutterball, just to even out that first frame. Tess bowls after me and will at least hit the pins. Then the jokes begin about how much better we will all get after drinking more. But this is a trendier, catered event so we are drinking red wine and eating Won Tons and chocolate covered strawberries. Nothing pisses off the bowling gods like drinking wine and not beer at a bowling alley (though I'm pretty sure this wine came straight from a box).

Bottomline is that I broke my own record for gutter balls and people around me were kindly suggesting they bring in the bumper guards that little kids use. After two games, we had had enough bowling and I'd run out of ball jokes. We sat in on a few minutes of karaoke, but I couldn't take it any longer after an overly long and particularily bad cover of "Total Eclipse of the Sun" sung by a guy. We left and breathed a sigh of relief that our annual bowling outing had been fulfilled.

So, if you comment on this blog, please don't give me bowling pointers. When push comes to shove, bowling is one sport I'm actually pretty proud to suck at. I've concluded that becoming a good bowler is like giving up on life and just wearing sweat pants every day.
Posted by Time at 11:50 AM

Hell, I sucked at it worse than you could ever hope to. For one thing, being small, these balls, if I could find one that the small spread of my little hand could grasp those holes with, and being so damn heavy, would try and wrench my arm right out of the shoulder socket, that is if I didn't lose my grip altogether in mid swing and barely miss my own shins. In spite of that I rarely hit the gutter. I just had to make everybody wait for the ball to roll somewhat slowly down the lane and bump over a few pins. I read an article concerning bowling balls recently in popular science, and these things have all kinds of scientifically wierd things molded into their cores that make them curve or go straigter, depending on the wrist action you apply to them.
And here I was thinking they were all just a bunch of big heavy plastic balls with lead cores........

And the certification? Well, Arthur pulled the sword from the stone and then lost it. I hear some chick with a great set of lungs went swimming with it and hasn't been seen since.......we spiritual decendants have had to rely on certificates of authenticity ever since. The Franklin Mint is sending mine now.......

We had (HAD) to go a bowling FUND raiser for some religious group ... holy roller types (and don't flame Tim.. find me and flame me!! these are MY comments)
AND we didn't even have the fun of poking our fingers into holes .. and getting them stuck..... we bowled the wee tiny baby balls.. that have no holes........ at least with holes you aren't likely to wind up and let the ding dang thing go...... the wrong damn way!!! does tend to make the religious ones pray just a tad harder though........i suspect we won't be invited back to another bowling fund raiser.. yahooooooooo

thanks for the laugh Tim...

the michael, the most telling thing here is that you read an article about bowling balls. But that is okay. And it is also a sad day when a king needs a certificate of authenticity, especially from the Franklin Mint.

Thanks morningstar, I got a real kick out of the thought of bowling being a holy roller fundraiser. I imagine their bowling league would be called, "The Holy Rollers." They probably pray for a strike and for the lord not to strike them down. Life's little ironies are what keep me going.

What can I say about bowling? It seems that every backwoods town I lived in as a child always had room for a bowling alley. Many doubled as the church on sunday. However, every alley has a great claw machine. You should have impressed your friends with your claw skills Tim.

You are sooooo funny. But all I could picture was you bowling in your crown, King's robes and most importantly tights (mmmmn yummy)
hehe

At least you had a great bowling partner!!

Shandi,
A bowling alley doubling as a church does fit in with Morningstar's Holy Roller's theme. The bowling alley I was at did have a claw machine, however it would take any of my money. There's a first. And see, it's hard to talk about bowling with making ball jokes.

Thanks Cherish, But even I am not ready for the image of me in tights. :)