A Screamer Discusses Methods of Screaming
by James Schevill

We all scream, most of us inside.
Outside is another world.
A neighbor fills her television dinner
With too much pepper and screams.
One woman stabs her door with a sword.
Another, overweight, steps in the shower
And screams, 'Fat! Fat! Fat!'
A man who takes flying lessons
Soars high in the clouds to scream.
Another dives to the bottom of his pool
Where he screams underwater.
A friend cleans his gun, screaming 'Assassin!'
I like an interior, smiling scream.
When you walk past me on the street
I nod my head to you and, smiling, scream.
You never hear me through the smile.
The inside scream has no echo.

Like Schevill, I like an interior, smiling scream, too. I find the people around me prefer that I employ that method of screaming as well.

I think about Schevill's poem sometimes when I walk through downtown Seattle, particularily in the rain. Sometimes I encounter people who scream on the outside. And in a way, I envy them.

Let's face it, screaming is pretty much programmed out of us by the time we reach adulthood. Oh, you are allowed to scream at sporting events and maybe if you are bungee jumping (or plunging off a cliff without a bungee), but screaming per se is discouraged in public places...say on an elevator for instance.

I found it ironic as a child that my father would scream at my brothers and I to shut up when we were shouting and playing. To this day, I do believe he made more noise yelling at us to be quiet than we ever made playing.

I understand, however, the need for quiet. I did, after all, work in a public library for several years while I was in high school and college. I also appreciate not screaming out in church, at funerals or while standing in a peaceful meadow or other pastorial scene (though I do believe yodeling is officially sanctioned screaming in Switzerland since anyplace that echos is exempt from screaming bans).

But I think we have lost something by being civilized and supressing our screams. Once again, I turn to great literature like Horton Hears a Who to help emphasize this point. If you don't know the story you have been living in a cave, but basically, Horton, an elephant with exceptional hearing, can detect a small civilization living on a dust speck. They are the Who's who later become famous in How the Grinch Stole Christmas. Horton hears the Who's and everyone thinks he is crazy. They decide to snatch the dust speck (perched on a sprig of clover) from him and boil it. The only thing that can save the Who's is being heard. They collectively scream their primal scream, "We are here, we are here, we are here." But it isn't until the smallest Who, Cindy Who, chimes in with her own yelp that the Who's are heard and their civilization is saved.

So I guess this is a metaphorical cry for everyone to scream...even it is for ice cream. Because every voice matters (even that inner child or those other voices in your head). 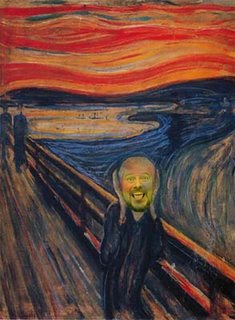 Gee whiz Tim, I can't keep up with you. Do you have to set the bar so high? No only are you posting the most brilliant writing and photoshop doctored works of art, but lately here you've been posting every day as well.

Screaming! I like it! I scream quite a bit myself, inside and out. I prefer screaming loudly on the outside. I will usually choose an activity where screaming is acceptable, but I have had the overwhelming desire to scream in an elevator. I might just do it one of these days just to see what happens.

I think I may just scream into the phone the next time I get a call from a telemarketer.

when you become "king" you could proclaim a "screaming day"

Well thank you Shandi. It is my way of screaming. I have found that writing everyday (and creating images) has become my therapy. And if you only knew how many times I wanted to scream in elevators. :)

Okay morningstar. I proclaim it SCREAMING DAY!Because I'm king of the world!

I am at this very moment confering with the Universal Association of Royalty for a copy of my Royal certification, which I will post in all it's glory when I recieve it.

When I slid past puberty, I could never scream again. I can only yell......heartily. When a machine I was working with back in my machinist day smacked me in the ribs and threw me across the shop, I lay on the ground yelling like an SOB, but scream? Can't do it. Of course, it remains to be seen what I'd do if bamboo slivers were slid under my fingernails, but maybe it would simply be a more sublime and better crafted yell. Perhaps a bellow.

Shandi's right. You have set the bar so high we can't even see the damn thing, much less leap over it. You, my friend, in this category, ARE king!

I absolutely loved this post. I was feeling you deeply as I read the entire post. Shaking my head in agreement as read word after word. (BTW Horton Hears a Who is one my most favorite children's story)But when I got to the end and saw the Edward Munch's famous The Scream painting with your face I about fell over laughing my ass off. You are so damn clever!! A true treasure in Blogland.

And to think all this time I've been trying to shut those voices up.

By the way, you do know we schizos are known for digging the whole Munch/Scream thing, right? We all think we look like that. I find it interesting that you actually do.

Thanks for helping me laugh my way out of the desert.

the michael, this is why will in all likelyhood never be a king. I didn't know certification was required. I thought all I had to do was pull a sword out of a stone. Regarding screaming versus yelling I will yield to the manner of metaphorical raging that you feel more comfortable with. And thanks for the support and compliments. Personally, I've never found a bar that was too high as long as I can reach my glass :)

Cherish, thank you for your always encouraging words and appreciating the humor. "Horton Hears a Who" has always spoken to me, though I must confess I was probably exposed to the television version long before the book. But I was a child of television.

Mickey, my many-faceted friend. I've always found it more productive to shut out the voices outside my head then in. And I have always appreciated Munch's Scream. It struck me that the first photo (which was me at age three) had a distinct similarity (including my head shape). I'm very happy to think I may have helped a bit in your battle with the desert. I think it is a fair trade for the inspiration I've received from your writings.

I've always wanted to take a reasonably high powered loudspeaker into a restroom; through which to play a recording of the most evil flatulance ever.

When a person enters I would sit in a stall and begin to scream in strained agony like I was trying to pass a small automobile. At the climax I would activate the recording which would be loud enough to rattle the fixtures. Afterwards I would moan in relief, flush and exit.

It's funnier in my head - which is why I choose not to scream out loud.

R. As I recall from backpacking with you and your father, neither of you would need amplication for this metaphorical scream. But I'm glad you have a dream to aspire to.