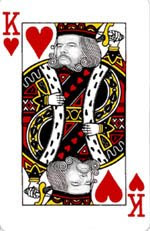 There is an art to insulting stupid people. You can't just can't just say to them, "Hey, you're stupid." That's about as original as those roadside diners that use catchy slogans like, "FOOD AND GAS AHEAD."

No, when you encounter a stupid person you have to look them in the eye, shake your head and say in a slow and deliberate voice some choice description about how stupid they are such as, "Boy. You are a few clowns short of a circus, aren't you?" Then you turn and walk away while they try and figure out what you just said. 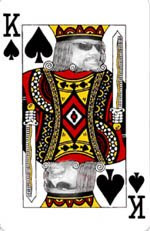 There is just something pleasantly pleasing about a well-crafted idiom about an idiot. Food comparisons work well:

That boy is a few fries short of a Happy Meal.
Sir, you are a few noodles shy of having chow mein.
I'd say you were a few peas short of a casserole.
I'm sorry, but you are a few beers short of a six-pack.
Son, you are all foam and no beer.
He is a few croutons short of a chef's salad.
Hey, I think your cheese has slid off the cracker.
You don't seem to have all of your corn flakes in the box.

And related to eating we have:

I'm afraid you are about one plate short of a tea set.
That idjit doesn't have all the chairs at the table, if you know what I mean. 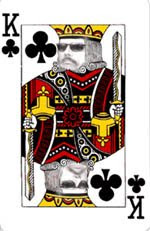 I would say he has a leak in the skylight.
I can see that there's a light on but I don't think anyone's home.
That boy's driveway doesn't quite reach the road.
I'd say there is a vacancy sign on his penthouse.
I think his chimney is clogged.

I don't think you would know if you were on foot or horseback.
You sir are not pulling a full wagon.
I can see that the gates are down and the lights are flashing, but there is no train coming.
Boy, your boat is floating, but someone stole your sails.

Son, I can see that the wheel is spinning but I believe your hamster is dead.
You are a few sheep short of a flock.
That boy doesn't have all of his dogs on one leash.
He is a few feathers short of a whole duck. 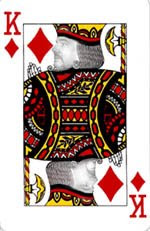 Technology and science lends itself well to putting down twits as well:

I don't think your satellite dish is picking up all the channels.
Son, I believe you are missing a few buttons on your remote control.
You are as useless as a Windows OS on a Mac.
Boy I think somebody slipped some metal in your microwave.
Hey, you should have held off donating your brain to science until you were done with it.
I think someone forgot to pay your brain bill.
His cell phone is a few bars short of a clear signal.
It baffles me that you beat 100,000 other sperm to the egg.
You may not be the brightest bulb on the tree, but you do blink once in awhile.

I think there is too much yardage between that boy's goal posts.
Son, you are playing soccer without a ball.
He is a few shots over par.
Boy, you are surfing in Nebraska.
In the pinball game of life, your flippers are a little farther apart than most.
That kid was left in the Tilt-a-Whirl too long.
He hasn't seen the ball since kickoff.

Sometimes it is just fun to point out lack of intellectual ability:

If I had to give you a penny for your thoughts, I'd get change.
Boy, you couldn't pour water out of a boot with instructions on the heel.
When your I.Q. hits 50, sell.
I'd say you don't know whether to scratch your watch or wind your butt.
He couldn't hit the floor if he fell on it.
Son, if your I.Q. was any lower we'd have to water you.
If you had another brain, it would be lonely.
Well, I can see that some village is mourning the loss of its idiot.

That boy's a few threads short of a sweater.
I think he is knitting with only one needle.
He's a few colors short of a rainbow.
His belt doesn't go through all of the loops.
Son, you are a few bristles short of a broom...

...and you are as sharp as a river rock.

I can not wait to use some of these!

How about a few sandwiches short of a picnic? chuckles

I love the cards!

Thanks Cherish. All I can say is use them wisely! :)

Those cards were BRILLIANT! As were the accesments of our lessors.......

Maybe I should just subcontract my blog out to you.

Thanks Michael, you are doing just fine on you blog without a subcontractor.

My Grandpa taught me one to keep the stupid guessing: "So, do you live around here or ride a bicycle?"

I love the changes Tim. Glad to see you've appointed yourself King rather than waiting to get knighted.

"Do you live here or ride a bicycle?" I like that. There are just so many, like, "I'm not saying your are slow, but the race is over and you are just putting on your running shoes."

I remember we had a similar discussion about some of your grandfather's idioms. Decribing slow and special people is an artform.

I hate to say it, but that bike one is beyond me. I'm a little slow today.
My favorite one is "You're as sharp as a marble!"

Don't worry Chanda, I'm not sure I quite get the bicycle one either. But sharp as a marble is good!