It would be good to be a king 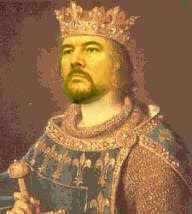 Since I will very likely never be famous, I've been thinking I could settle for maybe being a king. Having a Web site called Dizgraceland and calling myself Tim-Elvis, you would likely think that I would like to be the King, i.e. Elvis. But no, there can only be one Elvis (regardless of what countless impersonators in Las Vegas would have you believe). And I would never really want to be Elvis anyway. Because, although Elvis was and is famous, he is also dead.

That aside, I just think it would be kind of cool to be a king and sit on a throne wearing a crown and proclaim things. Occasionally, maybe I could whip out a sword and randomly knight people. Oh and servants could feed me grapes...ones without seeds, because it wouldn't be kingly to spit.

But I guess there aren't really too many kings left in the world anymore. That kind of makes me sad. So I guess I can't be a king either.

I think I could really get into this being king gig!

I'm sorry, Tim, but as the spiritual decendant of Arthur Pendragon, King of all the Britons, and by association, the colonies as well, I have beat you to the throne. However, because I like you, I should have a spare duke-dom to confere upon you if you're interested. You will, of course, have to pledge fidelity to me, which would certainly help my credibility right now in my ongoing struggle to have my rightfull place on the throne taken seriously by all these damn peasants.

Your first task of loyalty will be to take out that miscreant "burger king".

well much as I'd like to take out the freakish Burger King, I have to point out that I have photos of me as a king. We just have your words.

That "Burger King" guy kindof creeps me out.

As for Elvis, I dated an impersonater when I was in college. It was great for sexual roleplaying games, but I had a hard time getting him to just be himself.

If/when you become King, will you be changing your name to something a little more traditional like Arthur or Edward. I've never heard of a King Tim.

The Burger King is wrong in so many ways, it is a blog unto itself. Don't even get me started on the Freudian aspects of that one spot with the lumberjack and the constant references to meat.

But freaky King Quarterpounder and Elvis impersonator fantasy's aside, what's wrong with King Tim? There was a King Ralph. Though my middle name is Edwin, so I could be King Edwin. Maybe King Edwin the Nearsighted. Or the Most Flatulent King Edwin of Edmonds. I kind of like the ring of that.

Get yourself a loyal army and there's probably a country somewhere that you could take over without too much resistance. You'd probably be better off with a benevolent dictatorship though - kind of like the late King Hussein in Jordan.

R. I just want to be king. I don't want to deal with details, especially if it involves an army. Bummer.