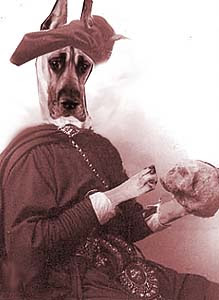 Alas, poor Yorick! I knew him, Horatio: a fellow
of infinite jest, of most excellent fancy: he hath
borne me on his back a thousand times; and now, how
abhorred in my imagination it is! my gorge rims at
it. Here hung those lips that I have kissed I know
not how oft. Where be your gibes now? your
gambols? your songs? your flashes of merriment,
that were wont to set the table on a roar? Not one
now, to mock your own grinning? quite chap-fallen?
Now get you to my lady's chamber, and tell her, let
her paint an inch thick, to this favour she must
come; make her laugh at that.
--William Shakespeare

I had to memorize this soliloquy from Hamlet when I was in high school. It was an Advanced Humanities class and we were studying the play. And for some reason the teacher had us pick sections and commit them to memory, punctuation and all. To this day I can still remember standing in front of the class and reciting, "Alas (comma) poor Yorick (exclaimation mark) I knew him (comma) Horatio (colon).

There are lots of interesting things about this soliloquy besides the punctuation. For one, most people misquote it as, "Alas, poor Yorick, I knew him well." More importantly, it is a reflection on death.

Hamlet is mucking about in his family cemetary while some grave diggers accidently dig up the bones of Yorick, the court jester, while they are digging another grave. Hamlet picks up the skull and begins meditating on the fate of all of us. If you are familiar with Hamlet, he spends most of the play agonizing about one thing or the other and can't make a decision for the life of him. Eventually he ends up getting everybody in the played killed, including himself. So the play is kind of a downer from that standpoint.

And my point? The older I get, the more I think about death. And I'm not talking in a morbid kind of way. I'm talking in a matter of fact, we are all going to eventually die kind of way. Oddly enough, thinking about it that way gives me comfort. For me, it helps me live. It's an absolute, so why should I waste energy standing on a rock shouting about the unfairness of it all.

I'm pretty much convinced that the only reason organized religion exists is to try and hedge on the inevitability of death. Religion is that safety net that you hope will help you bounce back after you die and land in a better place. Obviously I don't buy the heaven-hell scenario. I've been a bureaucrat too long to believe that anyone, even a god, could keep track of the paperwork that would determine who goes where after we die.

I do believe something lives on after we die. I think the psychologists call it the collective conscious or unconscious. Basically we are born with certain knowledge that is shared by all. Logic just dictates that humans would never have evolved if each person starts from scratch when they are born and none of their knowledge or experience lives on after they die.

In a sense, blogging seems to be an organized way to tap into and put things back into the collective conscious. This would explain why millions of people seem to arrive at the same topics to blog on, including, I'm sure, this one.

Anyway, this all started because I thought it would be funny to put a Great Dane's head on Hamlet. After all, it is the Year of the Dog and Hamlet was known as the Melancholy Dane. That makes this a visual pun for those of you keeping track of such things. Plus it is unofficially animal week at Dizgraceland.

I had no idea that line from shakespeare is so famously inaccurate. Thanks for straightening us out, my friend.

If I was channel old Will right now, I'd probably be saying, "What are these piles I see before me? Friends, Romans, countrymen, lend me your rakes, your pitchforks, your shreddders, for upon this day, you shall know that I looked into the face of toil, and with my mate's hearty aid, I did so back it down, and these piles of the shed of tree labors did go to their final demise......"

Sucks, I know, but I never understood what the hell he was saying either........

I'm sensing you are not a Shakespeare fan Michael. I never was overly fond of sitting through the endless productions of his plays that theater people seem so fond of reinterpreting every few years. But the Bard did know how to turn a phrase. I always liked another line from Hamlet, "What's Hecuba to him, or he to Hecuba that he should weep for her?" It just sounds cool when you say it out loud. It's particularily entertaining when you randomly say it to grocery store checkers.

And i happen to LOVE Shakespeare.. took every course i could that involved Shakespeare.. ok ok.. we ALL know i am weird!!! We have a rather good troup of actors that go around and put on various Shakespearan plays during the summer months in the parks.. appropriately named "Shakespeare in the Park" i dragged my girls out to more than one performance .. they (btw) now HATE Shakespeare.... alas alack!!! Sir absolutely REFUSES to even contemplate sitting out in a park on a hot steamy summer evening being eaten alive by the bugs.... sighhhh

And finally i am glad you didn't disappoint me Tim.. and are keeping up with the animal theme..... gave me a good giggle!!!

Morningstar, me thinks the lady doth protest too much, but I do appreciate Shakespeare. I won't quite go so far to say like. But then again you are Canadian and closer to the mother country than the colonies are. :)

And I'm glad you are liking the animal themes. Perhaps next week we will feature plants.

Any chance of a cute little viciously homicidal bunny coming this week? I mean, it is animal week. Seems like a good time for it, eh?

NOTE TO COMMENTORS: Hello! This entry was about Hamlet and death. Does anyone say anything about death? No! Give me a break. It wasn't really about Shakespeare. Okay maybe about Great Danes, but we are talking heavy duty shit here. Oh never mind.

BUT it is about more than death.. is it not?? it is about madness and scheming and inter-marriage and love and hate and war. Makes me think a little bit of modern politics actually....... madness and killing and war.. yup yup not much changes......

AND
my favourite quote - the one i was made to memorize goes something like this:

To be, or not to be: that is the question:
Whether ’tis nobler in the mind to suffer
The slings and arrows of outrageous fortune
etc etc etc....

Well, Morningstar, I hope the English teacher I remind you of wasn't too old. But you make a good point. Though the "To be, or not to be" line was about suicide.

Macbeth and the "out damned spot" line does kind of go with our animal week theme. I'll see if I can fit it in.

Okay Tim, I'll address the issue of death. We have been discussing this topic over on Hayden blog and I got a bit long winded, so I was hesitant to express the same views here.

I think that death is our greatest asset. Knowing that we are not enternal forces us to make the best of our life. Most everyone I know believes in heaven and they consider this life to be insignificant in comparison to eternity in the hereafter. They are the most miserable people.

Every one of my passions exist here on earth. In fact, most activities I truly love are considered to be unnecessary in heaven. Unnecessary? Who in the hell gets to decide what we can and can't do?

That being considered, it sounds like I'd be bored as hell in heaven. Think I'll make the most of what I've got here. When death comes for me, he better bring some strong restraints with him.

Thank you Shandi, That's what I'm talking about (though I would expect no less from someone who watched all of the episodes of Six Feet Under. I really like the "death is our greatest asset" idea. That is quotable. Hey Mickey! Shandi is Shining here!

And Morningstar, I wasn't really being critical of anyone not being "on topic." I enjoy all the comments.