I am a bobblehead 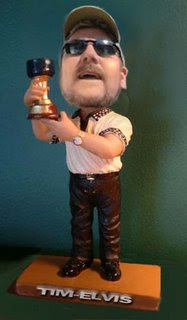 Hi everyone. My name is Tim, and I am a bobblehead. I mean this figuratively (which is neither a simile nor a metaphor). Though it is really quite simple to have a bobblehead made in your image and likeness for about $100 US. Reflected on in a biblical manner, this has many implications which I would prefer not to go into right now.

But I digress (pretty early in this entry even for me).

By a bobblehead, I mean I am one of those people who bobs their head up and down in the manner of Rainman when presented with new and often uncomfortable situations. I guess part of it is that I spend much of my time focused inwardly on the little world I have created in my mind and I feel more than a little uncomfortable when I am forced to interact with the external world for any extended amount of time. This becomes particularily troublesome when I travel.

I feel particularily awkward when confronted by salespersons or people asking for spare change. I even break out in a sweat when I see those product samplers in the grocery store. Product demonstrations at state fairs are even worse. I just become moronically empathetic when someone snags me to watch how well the Miracle Mop works or demonstrates how I can cook three meals at once in a single pan with a few key attachments.

Don't get me wrong. I am not a stupid man. I can see through even the most finely crafted sales pitch. I am, after all, a marketing professional. I just have this ingrained inability to hurt people's feelings whether they have them or not.

So going ashore in Mexico while we were on our cruise was a challenge for me. Because unless you sign up for the ship sponsored shore excursions and fork over your money right up front to be whisked around in a tour bus to officially sanctioned places where people will demand more of your money, you are basically on your own to decide which one of the unsanctioned people demanding your money you will give it to. 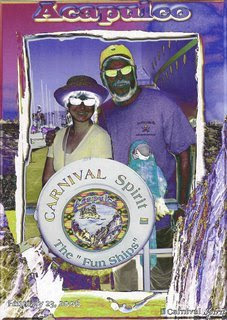 Let's face it. There is no way to disguise the fact that you are an American tourist who just stepped off a cruise ship. And if you can afford to go on a cruise, you are fair game to afford anything you will find on shore including time shares, tequila factory tours, trips to a sandle factory or cheap straw hats and blankets (which for some reason are a big seller in Mexico despite some of the highest average tempatures in the world). Chicklet gum has also become one of the number one commodities of the Mexican tourist trade as well.

Every port we went to shore Tess had to drag me away from someone trying to shove me in a cab because I nodded my simple bobblehead head in agreement when they grabbed my arm. I practically adopted one cab driver in Acupulco. And some guy on a water taxi named Jorge (Hore-Hay) in Zihuatanejo kept shoving a photo of a swordfish in front of me and laughing and pointing. I nodded and smiled and the next thing I know Tess is holding on to one leg while Jorge is trying to drag me onto a fishing boat.

I am not by nature a haggler, either. So if some vendor wants $40 for a little papermache turtle with a bobbing head, I will likely hand it over unless Tess intervenes. God help me in the silver shops of Mexico. I'm like a parakeet. If it is bright and shiny, I will begin chirping, spitting up seeds and bobbing my bobblehead head up and down in delight. PT Barnum would have loved me.

I narrowly avoided joining the Carnival Vacation Club while on board. Some big guy slapped a free lanyard (worth about .33 apiece) around my neck, shook my hand and invited me to an onboard presentation of the club. I went. It was essentially had all of the aspects of a timeshare presentation with a little bit of Amway pyramid scheme thrown in to spice things up. For a mere $6,000 I could buy into the club and get umpteen vacation points. But that's not all. If I signed up that day, I could get $100 onboard credit and priority status when we disembarked the ship at the end of the cruise. I was clapping my hands together, bobbing my head and drueling like the village idiot by the end of the presentation. Inside I was screaming like Captain Kirk in a force field, "MUST...GET...OUT...OF...THIS...SCAMMMM!"

I bolted for the door and avoided the vacation club guy's calls throughout the rest of the cruise. I pretty much attribute that to never having the burned out bulb in my cabin replaced.

Being a bobblehead, I thrive in the safety of cyberspace. I have very little of the negative symptoms of a bobblehead when I'm online. I delete spam and don't fall for Nigerian banking scams. I'm eBay savy and pretty damned assertive via e-mail. I am also much better looking on the Web than I am in real life. I feel pretty fortunate to have been born in an era of the Internet.
So I hope my little confession here will help the other bobbleheads of the world. If it does, I would ask that you send me a small token of your appreciation. Let's say you simply give me your bank account numbers, passwords and authorization to wire all of your assets into my Paypal account.

Confession is good for the soul, my son. I share the same fear of confrontation, only I avoid it altogether rather than risk being cornered like a rat and have to resort to telling some dweeb to eat shit and die when they just won't back down.

And yes, I also am incredibly handsome, debonair, intelligent, and desirable on the net, while actually sharing the same phylum as pond scum in real life. Thank God for the great enhancer, the net!

But my head don't move, dude. Not a bit. Here we differ.

I guess that means you aren't going to send me your bank account information either. That's okay, though. One of your goats would be nice. But I'm down with it if you aren't cool with that either. :)

Hmmmm... very interesting Tim. I never would have guessed.

I on the other hand, have the opposite problem. When it comes to my money... I'm a bit of a b*%#/! All this bitchiness is directly related to the amount of money involved. When it comes to anything under $50.00, I am delightful and polite. At around $100.00, I start in with "Well, I really didn't intend to spend that much money... and I don't want to insult you by haggling...". $150.00-$500.00 lots of furrowed brows, comparison shopping, questions to the salesman, demonstrations, and the like. When it came to purchasing a car, total and complete b*$#//! "Can you show me a less "loaded", standard equipped, better deal? When did I say I wanted a warrantee... if you're gonna sell me a piece of crap car anyway, the warrantee isn't gonna help. If this car breaks down on me during the first 20,000 miles, I'll sue the pants off you for false representation. Now, get your manager I'm only talking to the guy that can make decisions. I'm going to buy a car today. It can be from you or the schmuck down the street. No one goes home until I am satisfied." After the final papers are signed, I apologize for my behavior and we all go home happy. One car dealer actually offered me a job. I turned him down stating that I wouldn't be able to get along with him.

You are smart to work to get the best deal no matter what you are buying. I'm actually the same way, but I prefer to do my comparison shopping online so I know what the best price should be. I'm a shark when it comes to travel shopping. I admire how you deal with car salespeople. The last time I bought a vehicle, I went through one of those sales brokers that handles all of the searching and negotiation.