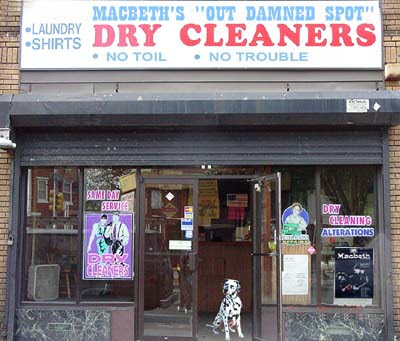 And no, this is not a real dry cleaner. I'm suprised there isn't one with this name. Or at least I'm suprised that I Googled it and couldn't find one. But there should be.

This is, of course, is another visual pun. To get it, you must have a rudimentary knowledge of the most common lines from Shakespeare's Macbeth.

I know it is wrong, but I often think in puns. Someone says something and my mind immediately starts racing to think of a pun for it. Or I think of a double entendre (which is just a puffed up way of describing something that has another meaning that is dirty [i.e. A woman walked into a bar and asked for a double entendre and the bartender gave it to her]). A double entendre is often based on innuendo (which is another puffed up way of implying something dirty without coming right out and saying it). The latter word skills are useful in the politically charged world in which we live and work.

I'm not sure why I think in puns, double entendres and innuendo. I have also been know to mess with people over literal interpretations of phrases that aren't intended to be taken literally. For example I remember being asked to pass the butter to my father as a child and chucking it across the table onto his plate. I only did that once. I also would torment him when he would ask me what was on the television and I would reply, "a lamp and lots of dust." I was an annoying child.

My fascination with word play very likely led to my desire to be a writer. In college, I was one heck of a headline writer for the school newspaper. For the uninitiated, headline writers are the punsters of the journalism world. I remember writing a headline for a review of the movie Cat People that read: CAT PEOPLE DESTINED FOR THE LITTER BOX. I thought that was hilarious at the time.

Unfortunately puns are considered the lowest form of humor. Thus my writing career has remained dramatically unstellar. But blogging has channelled my base punning skills in a new direction. With the new ability to merge words and images at the click of a mouse I have been able to add this new dimension to word play that annoys more than one sense at a time.

So I think a new word for visual puns should be created. Perhaps they should be called PUN-TOS or PUNTOGRAPHS. I could be the father of a whole new field called PUNTOGRAPHY. I could rule the known universe.

You are so clever!

Thanks Cherish. Someone once told me I was too clever by half. I'm still thinking about that.

Kristy, Coincidently, my wife teaches at Mark Twain Elementary. And he was a great writer. But since he is dead, he is never a Twain I shall meet.

Limericks or knock knock jokes are the saddest evidence of intellectual poverty. I'll even give you "pull my finger" over a knock knock joke. Ohhhh, and those "how many so-n-so's does it take to such-n-such" jokes... now those are just stupid.

Puns are fun. I always turn words around in my mind a few times to see their alternate meanings. I will always settle on the punnier interpretation.

I love to reorganize misheard speech patterns into new and interesting images. For instance, "leather squirrel" was created from "lovers quarrel". I'm sure that isn't considered humor.

As far as I'm concerned, anything that makes me smile is clear evidence of intellectual wealth.

So "pull my finger" aside, are you telling me you are Leather Squirrel? For some reason I had assumed it was Light's alter ego.

Not as fascinating as Leather Squirrel, but interesting.

i vote for punography...... that was .. in my humble opinion.. one of your best yet photoshop jobbies...

and thank you for the Macbeth mention.. even if it was the only way you could get the dog into animal week.....

"Your face, my thane, is as a book where men
May read strange matters. To beguile the time,
Look like the time; bear welcome in your eye,
Your hand, your tongue: look like the innocent flower,
But be the serpent under ’t. "

have a great weekend

smiles... can't wait to hear what You come up with next Tim. You are so punny! Hoping Yours and Tess's day were more nsync today. Take care and have a great weekend.
Hugs,
~gina~

Morningstar,
So I guess this makes me a Punographer. Sounds like an innuendo to me.

Love the quote. "False face must hide what the false heart doth know."

You have a great weekend, too.

Hi Gina,
I showered after Tess today and order has been restored. Thank you for asking and you have a great weekend as well.

Damn, she got to "punography" before I did. Sick minds think alike. I am also a great fan of the pun, espcially when it seems to have leapt forth innocently from the workings of my strange thought processes, which explains why I don't actually come up with them very often, at least good ones.

By the way, Tim, I need to reference you as an "un-named source" for crucial intelligence I need to get to the CIA right away concerning Lights' nefarious behaviors which threaten national security. I know you laughed at his brilliant perversion of our dearly beloved Dr. Suess, so I know you know something the Bush Administration could use to justify an invasion of his backyard to uncover the hidden supply of oil he doesn't even know he has. I promise to recommend you as director of photoshop propaganda if we pull this off, unless of course Lights gives in and posts again, in which case I will have utterly no use for you and will claim to have been misled by your deviant use of photoshop to enslave us all. Your trusted and loyal friend, THE Michael.

I ain't no damned alter ego. I don't even go to church. I suppose I would like frozen waffles tho. But being as how I'm a squirrel I don't have a toaster.

I think you will find that the majority of your readers are very fond of puns and wordplay. It ain't all about the photoshop.

THE Michael,
I'm going to have to break it to you gently. Lights has hid one too many of his nuts in the ground and has lost track of them. But we found him a nice farm to live on. He's in a better place now.

leather squirrel, my odd little rodent friend. For a rat with a hairy tail, you do have a way punning way about you.

Lights,
I think I threw THE Michael off your trail for awhile. But I can't cover for you forever.

It's cool Tim. I have initiated a devious plan which involves eliminating The Michael and replacing him with an exact replica. I just hope I can get him before the government does.