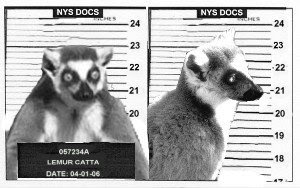 I was watching some trash programming last night that kept hyping an incident on some morning show in Dallas where a lemur went berzerk and "menaced" the hostess. When the clip finally came on all it turned out to be was this poor frightened animal clinging to his handler and baring his teeth at the newscaster.

Just keep in mind the next time you are taunting a lemur with a microphone that, they may just eat plants, but they are still wild animals and don't always make the right choices when they lose their temper. Put yourself in the lemur's place and tone down the sensationalist reporting.

As animal week winds down here at Dizgraceland, I thought it only fitting to commemorate that important bit of news. It did epitomize for my why I think electronic journalism ISN'T(journalism that is). I can see some religious group in Texas starting an anti-Lemur movement. The poor creatures' numbers are dwindling as it is. Can't we just get along with them?

I just had to get that off my chest. Happy April Fool's Day everyone. Keep it safe and watch out for whoopee cushions. They have been known to explode.
Posted by Time at 9:22 AM

I weep for the Lemurs.

My heart aches for their plight.

God knows their eyes scare me more than Shandi does.

And that’s pretty damn scary as far as I am concerned.

Lemurs are my kind of people. Them and marmosets. However, since there's only room in their natural habitate for either them or humans, guess who gets to move out? What really pisses me off is that we're melting the habitate right out from under many arctic species, including polar bears and seals. What in the hell are we going to do when the camera teams from the Discovery Channel can't find any wild animals to film? Oh well, as long as we got Mickey and Goofy and Donald..........

Mickey, I like "I weep for the Lemurs." Perhaps a follow-up entry with that title on the anniversary of the Lemur attack. And I think I'd rather face an angry Lemur than an angry Shandi.

THE michael, I'm assuming you are referring to Mickey mouse and his cartoon friends and not my friend Mickey of Mickey Ripped fame. Regardless, The Jerry Springer Show get's my vote for the inbreeding ground for future wildlife programs.