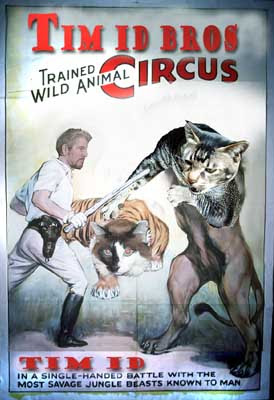 I've always loved animals. We have three cats living with us. I hate to say "own" when referring to animals. How can you own a living thing?

I often imagine that our cats ignore the names we've given them because they consider them slave names. And sometimes I feel guilty because they are in essence captives in our home. But I rationalize that it keeps them safe and that true freedom for them in our currently human dominated planet would likely equate to an early death or a life lived in hiding (though one of our cats spends a good portion of her time under our bed).

The news seems full of so many cases of animal abuse in the Puget Sound region of late. Just last night I caught a snippet about some psychopathic kid hanging a dog from a tree. Fortunately it was rescued by a couple of other children and cut down before it choked to death.

I have no use for people of any age who torture animals. There is something fundamentally missing in their genetic make up to harm a weaker creature for recreation. And they should be culled from the human herd.

I find it interesting that nature has species that only eat plants (herbivores) and species that only eat meat (carnivores). Then there are garbage disposals of the natural world that eat just about anything in their path, animal or vegetable (omnivores). Humans are, of course, omnivores (and anyone who has watched people at a buffet will attest to the fact that humans will eat anything in their path). But does being an omnivore mean we are more evolved or just bottom feeders who walked out of the ocean because we were sick of eating plankton and left over fish?

Regardless, being an omnivore and a person who loves animals, I am tripped up by my own hypocrisy. I know the horror stories of slaughterhouses and nightmare conditions of poultry, cattle and swine raised for the sole purpose of being consumed. Yet I eat meat and I wear leather jackets, belts and shoes (albeit with many synthetic components).

It's a moral dilemma for me that could be resolved if I became a rabid vegetarian. But I know myself well enough that my road to hell is indeed paved with good intentions. Until they develop a Veggie burger or tofu dog that doesn't taste like a tenderized hockey puck, I will always crave meat. And my kryptonite will always be deprivation. I can be indifferent to most things until I can't have them. Then they become my holy grail.

So I soothe my hypocritical omnivore soul by being kind to the animals I don't eat and trying to work for "humane" as possible treatment for the ones I do.

I understand your feelings and agree completely about eating meat.

I also agree that anyone who tortures or kills an animal should be put away for life. I am still haunted by the dog these kids set on fire, beat, put in a bad to die and he still survived. Oh gosh it was just awful. If they will do this to a defenseless animal what else are the capable of doing.

About a year ago, our local newpaper ran a story about the obscene numbers of animals euthanized every year. On the front cover was a 3x5 photo of dead dogs in barrels. It was horrific and shocking. Our fine city was in an uproar over the graphic nature of the photograph. But... apparently not as horrified over the numbers of animals put to death. At the time, I decided to volunteer my time with a sterilization education program with the local SPCA. As it turns out, the group was poorly run by an assortment of egoes that I couldn't stomach being around. They actually looked down on me for having ONLY 2 cats.

Anyway, I also love animals and understand the torture they endure. But... I still eat meat and I bought a leather couch for crying out loud. Does that make me a hypocrite???

Still reading ya, still lovin it and still smiling. Thanks Tim. Shoot, all this talk about cuffs and meat... ummm are You trying to get me all worked up or what? ;o)
Hugs,
~gina~

"It's ok to love your pets, just don't LOVE your pets". If you know what I'm saying, and I think you do.

Tim, the theatre of preditor vs prey is not a morality play. Animals consume each other because that is the way evolution designed them. No reason to root for the fox or cry for the field mouse, it's just nature functioning as it was designed to. We, as humans, I believe, DO have a responsibility to understand where our proteins come from and respect the sources, by not inducing suffering or mistreating animals just because they are lower than us on the food chain. That which sustains us is a gift from the Earth not to be taken for granted. As for vegetarians somehow being off the hook because plants are percieved as less deserving of some special consideration to me is even further hypocracy. I think the native American's got it right when they thanked the spirits of the animals they hunted for giving up their lives, albiet not exactly voluntarily. When you are caught in the water with a great white shark or cross paths with a hungry renegade grizzley, believe me, they will not be the least bit concerned wether or not you suffer; they are simply following the imperitive to survive. I would not under any circumstances hunt an animal merely for sport, for that simply demonstrates a human's lack of respect for life. But I will hunt one for food if I had to. And I will give a prayer of thanks to the spirit of that animal.

Perhaps you'd feel better if you could limit yourself to eating omnivorous and/or scavenger animals. Like grizzly bears. Or bald eagles (ever see a pair of eagles go after a road-kill possum? I have and it's majestic).

And I DON'T mutter!

Tim, what is this woman muttering about?

I refuse to deny what I am. I'm a born omnivore, without apologies. I also minimize, and prefer organic, free range, etc. trying to be a proper predator instead of a prison guard keeping a slavery of animals.

For some years had a successful catering business called "Top of the Food Chain."

Hayden said...
This comment has been removed by a blog administrator.
12:05 AM

Yes Cherish, I read somewhere that many serial killers started out torturing animals as children. I think it does show a basic lack of respect for life.

Shandi,
Good for you for wanting to take action. It's a pity that people who work in man similar programs can get so radical and actually hurt their cause. And we have leather furniture as well and love it. I rationalize that one with the knowledge that the same cows that were killed for their meat were used for the leather. At least all of them were put to good use.

Gina, Glad you still stop by. It's nice to have a captive audience ;)

Lights, Nice quotes. I think the second one is very appropriate for THE Michael and his goats.

And speaking of THE Michael, I agree the native Americans did have the right idea when they honored the spirit of the animals they hunted and dispatched for food. Perhaps people should stop thanking god when they say grace and thank the animal that died for their dinner. I also don't condone trophy hunting. I would have added that to my entry but I didn't want to hear from Ted Nugent.

Muttering Kristy, Good suggestion. I suppose I could also try to only buy meat that comes from animals that die of natural causes. But I suppose that would have its drawbacks as well.

Hayden, I think yours is the healthiest choice, both emotionally and physically. And I think the name of your business was great. Much better than Bottom Feeders.