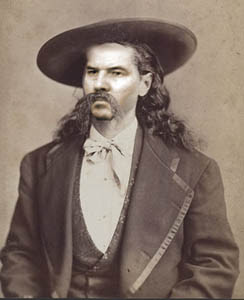 I've made it clear almost a year ago that I like the mini-series Deadwood on HBO. Because if you are looking for the real, unromanticized version of what it probably was like in a mining town in the old west, that's your ticket.

One of my favorite characters in Deadwood was Wild Bill Hickock. Wild Bill (born James Butler Hickock, so I'm not sure how he got the nickname Bill) was a real character out of the wild West. And as with Davy Crockett and Daniel Boone, I have always got Wild Bill Hickock and Buffalo Bill Cody confused. But in this case, they were at least contemporaries and Wild Bill even starred in Buffalo Bill's Wild West Show for awhile until he got fired for being drunk (something about not firing blanks during the staged gunfights...picky, picky, picky). 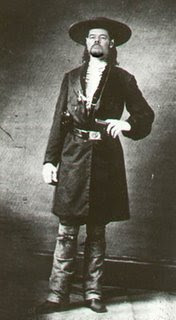 The cool thing about Wild Bill Hickock was that he pretty much lived up to his legend. He had at various times in his life been a stage coach driver, an Army scout, a professional gambler and a U.S. Marshall. And he was pretty good with a gun. It is said an outlaw bragged to him that he could "kill a crow on the wing (flying)." Wild Bill replied, "Did the crow have a pistol? Did it shoot back? I will be."

That's a line even Dirty Harry would be proud of. It's hard to have a movie about the west that doesn't have Wild Bill Hickock in it. His character appeared in Little Big Man with Dustin Hoffman. Jeff Bridges starred in a movie about Wild Bill's life. And apparently Wild Bill was the model for the Rooster Cogburn character played by John Wayne in True Grit. Unfortunately, Wild Bill meets the same end in all of the films (except for True Grit).

Wild Bill survived for so many years because he was always particularily cautious. He never held a drink in his right hand (it was always prepared to reach for his pistol), and he almost never sat with his back unprotected. All it took was one time sitting at a chair at a poker table at Nuttal & Mann's Saloon No. 10 in Deadwood that wasn't against a wall for him to regret throwing caution to the wind. He got shot in the back of the head while hold aces and eights (all black). It was to become known as the deadman's hand.

This is why I try not to vary my little OCD routines.

I LOVE the series Deadwood. I'm waiting for season 2 to come out on DVD--got the countdown calendar going and everything. Do you get HBO? If so, you should get the season 1 disks anyway, just for the special features and commentary. Great series.

Kristy, I've always said that if you don't have HBO, you don't have TV. But I would like to get the disks and check out the commentary. I'm also reading a great book called Deadwood by Pete Dexter. If you like the series you should like the book.

The reviews I heard about Deadwood more or less said that the series went overboard with the profanity as much as the violence. I know "outlaws" didn't bite their tongues much, but social mores were harder on people cussing in public just for the sake of cussing than it is today. Now, if you are living in a dangerous place where the law is not exactly to be counted on, I kinda imagine you'd use your mouth alot less unless you were begging to get killed. When you mouthed off to someone back then, it was a fatalistic approach to life that tended to shorten it. I doubt very seriously that Wild Bill did alot of the talking. His responses were short and to the point, tho.

Excellent photos Tim! I visited Deadwood last year when we went to Sturgis for the bike rally. Great town. Really beautiful. You could see and feel the old west all around you there.
Hugs,
~gina~

Thanks Gina, I would like to get to Deadwood and Tombstone at some point.

THE Michael,
It does give a whole new meaning to shooting your mouth off, though. :)