Escape to Circus Week at Dizgraceland 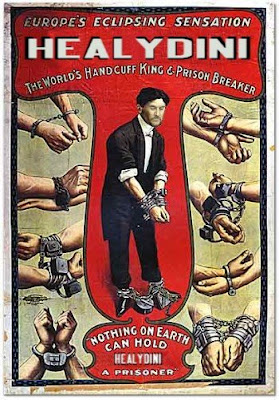 Well I plugged in the theme computer and it seems to indicate it is Circus Week here at Dizgraceland (I warned you it was getting to be like the Travel Channel). And although I never wanted to run off an join the circus when I was growing up (the only one that ever came to Boise was the Shrine Circus and I have always steered clear of Shriners), I did want to be Harry Houdini.

I became interested in Harry Houdini's life when I saw a movie about him starring Tony Curtis and Janet Leigh when I was about 10 or 11 years old. I always liked Tony Curtis (whose real name is Bernard Schwartz). Ironically Harry Houdini's real name was Ehrich Weiss. I love life's little coincindences.

Anyway, the movie inspired me to find out more about Harry Houdini which in the pre-Internet world ment taking a trip to the library. If I'd had Google as a child I would likely never have left my room. So I read all of the books I could find and understand. Young Ehrich Weiss was a young Hungarian immigrant who ran away from home at age 12 to help raise money for his poverty striken family. He worked his way along the carnival circuit and began working on becoming the world's greatest escape artist.

Houdini died on October 31, 1926 after collapsing on stage. The legend goes that he was experiencing stomach pains prior to the show and was punched in the stomach by a University student testing his ability to withstand blows to the stomach. It may or may not have ruptured his appendix. It is a moot point. He died.

One thing Houdini inspired me to do was learn how to tie and untie a knot with my toes (apparently he perfected this skill to help him in some of his escapes). I spent quite a few days one summer working on that feat (no pun intended). To this day I have never had cause to use this skill.

More importantly, Harry Houdini inspired me to be an escape artist by immersing myself in books. I've used that skill ever since.

So next time you are trying to get out of a pair of handcuffs, I ask that you stop and bow your head for Harry Houdini, the greatest escape artist in the world.
Posted by Time at 6:25 AM

Wow! Tim, this new graphic at the top is awesome. Your talents amaze me.

I love the new Healydini picture as well. I think you can consider your latest to be works of art.

I was never into Houdini, but my brother was. He had me follow him up to the roof one day, begged me to tie him up with ropes, and then jumped off the roof into the pool. He survived... the stunt. But, someone spotted him on the roof and called the cops. He's kindof stupid that way.

Thanks Shandi,
I do it all to piss off the THE Michael.

I've obvious got a new animation software program I've been playing with.

And I think you should have tied the rope a little tighter on your brother :)

Speaking of magicians/escape artists: I am going to see Penn and Teller in Vegas the end of May. Not really relevant I suppose, I'm just happy about it.

Very relevant. Do me a favor and stand up and yell bull shit every now and then when you see them.

The Houdini story is so very fascinating. He was so amazing! I watched all those shows where they revealed how magic tricks were done. It ended up being a bittersweet experienced. I loved knowing how they did it but it did take the fun out of magic.

Cherish (welcome back from your weekend away BTW),
Yes, I believe magic is much more fun when you don't know how it is done. It's kind of like Photoshop.