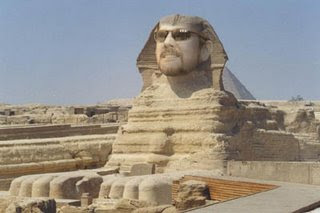 When I was in seventh grade, I read this little paperback book about Egyptologist Howard Carter discovering King Tut's tomb in 1922. For some reason, it convinced me at the time that I had lived in ancient Egypt in a former life and very possibly could have been the boy King Tutankhamun or King Tut as the newspapers nicknamed him.

It was amazing how the discovery of King Tut's tomb fueled the imagination of much of the world back in the 1920s when it was discovered. Tons of cities around the United States opened up theaters with ancient Egyptian inspired architectural themes.

One of those theaters was built in Boise. It had gotten a bit ragged around the edges by the time I started going there as a child, but it still had this unique look of an Egyptian temple that fascinated me. I loved getting there early and soaking in the atmosphere. I also liked the authentic depiction of Egyptian dancing girls on the walls (I think it was the first image of a naked breast I can remember until I discovered my older brother's stash of Playboy magazines). I was a very curious child.

There was a time shortly after my fascination with Egypt was fueled by the story of King Tut, that I pondered becoming an Egyptologist. It sounded exotic and sophisticated. But as with all the other ambitious careers I pondered growing up, someone inevitably pointed out the lack of practical applications of such a vocation in Idaho where the most exotic thing excavated at any given time was a potato.

I sometimes wish that I had been able to overcome the naysayers and actually pursued becoming an archeologist. But then again I'm sure my romaticized concept of what that actually entailed wouldn't match the drudgery of brushing dirt away from pottery fragments under a desert sun. And I imagine Indiana Jones was the exception when it came to being a super hero archeologist.

But you probably want to know more about me being the born again King Tut. I tried to confirm the fact when I was passing through my New Age phase. However, I simply could not find a psychic or astrologer who could confirm my karmic lineage. For the most part the psychic's seemed to be fascinated by the bumps on my head and the astrologers would simply shake their heads while reading my chart and tell me it gave them a headache.

Now those of you who have read my blog for any length of time (which would be mainly Shandi and Lights) may remember my obsessive ranting about thinking I had also been Edgar Allan Poe in a former life. I do not want you to think that I make a habit of proclaiming such things. After all, one of the most disillusioning things about people who claim to be reincarnated is that about 98 percent have at one time been Napoleon in a former life. But unless Napoleon's body was a revolving door for souls, having more than one person claim to have been him does throw a wrench into the validity of their claims. I do want to point out, however, that if I was King Tut, that would not preclude me from being born again as Edgar Allan Poe. I don't think there is a rule in the reincarnation book that says you can't be famous twice as your soul progresses.

Anyway, after I finally did let go of the notion that I was King Tut (which was kind of ruined for me when Steve Martin wrote and performed a song about him on Saturday Night Live years ago), I hung onto a distinct fascination with ancient Egypt. Seeing the Great Pyramids in Cairo is still on my "to do" list before I die. I also used to have "riding a camel through the Valley of the Kings in Egypt" on my list until someone who had been there pointed out that there are no rent-a-camels in the Valley of the Kings. If you want to ride a camel, you have to do it around the Great Pyramids. People are always bringing me down that way.

So, in that light, I'm toying with it being Egypt at Dizgraceland. Though I am starting to feel like the Travel Channel. But then again every week would be Las Vegas week. Regardless, I'll just play it by ear and see how many Egyptian things I can put my face on for a week or so.
Posted by Time at 6:14 AM

Lights and I have been reading you now for almost a year and a half. We actually got into an fight about it the other day. He was going on about how he reads Gunter and Monkey regularly along with Quesadilla and Dizgraceland. I told him that while he reads more, I have been reading longer and he would never have found you if it weren't for me. So there!!!

Shandi, You pose an interesting question. I believe after a certain number of incarnations, you begin to be born through a process of splitting like a flatworm. So bellybuttons become irrelevant.

Regarding you, Lights (and the Leather Squirrel for that matter), I have always valued your sticking with me (as I have with you and to a lessor extent Lights and his brief career as a blogger). You will always be my first, though.

Are you saying you have NO bellybutton then?

Sticking with me is more of a challenge considering the number of times I have changed my URL. I'm glad you stuck it out. It's hard to forget your first. :-)

If memory serves me right... and I could be wrong here... but.... I found you on blogexplosion and the rest is history. I was thinking, "Dizgraceland? Now that's a guy who likes puns."

Shandi, Shandi, Shandi...I was speaking of karmic navels (which would be kind of a cool blog name). And your "always remembering your first" innuendo was not lost on me. :)

I do remember you visited from Blogexplosion (and you are probably the only person who visited from there who didn't do so because they were trying to win mystery points). I believe the first blog you commented on was one of my rants about people designing blogs like ransom notes. It's hard to believe that was 320 some blog entries ago. Those were the days.

Stop taunting me squirrel. For years I tried to get residules from that song, but noooooooooooo.

"Show us some proof that you were King Tut," they said.

We had a theater in Salem based on the Melancholy Dane. It was called--no surprise here--the Elsinore. LOVE those old theaters!

Kristy,
I've seen that theater. It's a beautiful old theater. They sure beat those strip mall boxes.

Tut, tut, Tim. I have both of them beat. I was your fan way back when you got into that pissing contest with Moses. I was rooting for you all the way to that unfortunate last inning when Mr holier-than-thou caught you without your waders. Then I switched sides and learned the art of stone carving.

So, explain to me why the Egyptians never used the right of imminent domain to raze those dilapidated eyesores in favor of some casinos? Hey, that pyramid in Las Vegas fits in nicely with the contemporary landscape!

I want to go forward in the future and work as an alien xenoarcheologist and help piece together how this species destroyed a perfectly good planet. Leave a DVD with copies of your blog on it in a nice safe place so I can herald it as the finest work of human literature ever discovered, just make sure to send me a note where you bury it so I can "discover" it.

THE Michael, I can always count on you to come up with a comment that is more eclectic than the original post. But I think the Scientologists are a bit ahead of you on the alien front. Sorry.

Great pictures (as always!!)
When I was about 9 or 10, my parents brought me to Washington DC,to see the King Tut exhibit. It was amazing!!! It gave me such a love for early egyptian history!! My son had to do a report Egyptian Gods. I got an A+ on the project. hehehe!! I had so much fun doing the report. A&E and DISCV have so many wonderful informational shows on Egyptian times.
Did you ever see the King Tut History Mysteries? It was about his death and who killed him. It was good but I was a bit disappointed but it was still a good show!

Thanks Cherish, I never saw the documentaries, but I wanted to. From what I read, they thought King Tut had been poisoned. He was only 19 as I recall. Glad your son got an A+ on his report, wink, wink.

The post that got me hooked was the one about the sea-monkeys and their inventor. It was then that I realized that you were not just some crazed Elvis fan. It's been a lot a fun.

Don't pay any attention to the squirrel. That bastard's nuts.

Lights, You can't go wrong with Sea Monkey posts. But it pains me to think you had your doubts about me.

This Leather Squirrel thing is driving me bonkers. Sometimes I think it is Shandi. Then I think it is you. Maybe it is Stephen King. I wouldn't put it past him.

I'm forced to de-lurk by this one. Laughed until I cried at this set of pics. Great way to start to morning!

Why thank you Hayden! I never thought of my photos being a "de-lurking" device, but I'm glad they made you laugh.