Leader of the band geeks 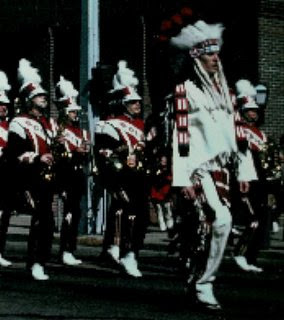 Okay, I am rooting for the Seahawks to beat the Panthers and move on to the Superbowl for the first time in history. But if the truth were told, I was never...how can I put this delicately...athletically inclined. I was a band geek. And even worse, I was a drum major, the leader of the band geeks. So lest any of you think I am a mindless jock advocate because I was once a Seahawks season ticket holder, I decided it was best to come clean and embrace my geek roots.

Before it was deemed not politically correct to do so, Boise High School's mascot was the Brave. And as the drum major, I was Mr. Brave and wore a full headress and buckskin's when we performed. 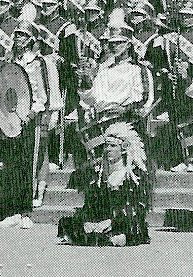 So, when the jocks would play football or basketball and get oohed and aw'd at, I was on the sidelines dressed like the Boise Brave, directing the band in endless choruses of Fight for Boise or one of our favorite fight songs, Warcry. Of course there was also Peter Gunn, the Lion Sleeps Tonight and the Pink Panther.

I suppose if you are in band, it is better to be the drum major than a bass clarinet player (which I was in concert band). And if you had to be the drum major, it was much cooler to dress in leather than have one of those tall furry hats that made you look like one of the Wicked Witch of the West's body guards in Wizard of Oz.

I was proud to be the drum major. As Lucifer once pointed out, it is better to rule in hell than serve in heaven. If I'd played football, I would have spent most of my time shoved in some linebacker's locker. As it was, I got to have the cutest sophmore girls apply my war paint. And to this day, I have pretty darned good rhythm.

So if any of those Bud light advertising people are looking for the next anti-hero to salute in their next commercials, let's hear it for the band geeks and the lonely guy out front leading them at half time while the jocks were in the locker room snapping each other with towels.

Oh, and I could still direct the Star Spangled Banner if I had to.

Well, think about it.....how many jocks own multi-billion dollar corporations? How many geeks? Whose laughing now?

It only took one season of football to demonstrate to me what happens when large people encounter small people at high speeds. However, I DID get to prove at least twice that small defensive ends can down larger quarterbacks if said smaller defensive ends hit them fast enough from their blind side. Ah, Glory days.......

Unfortunately, I'm not one of the geeks who is laughing. Though I did have an opportunity to buy this new stock back in the early 80s called Microsoft. Only an idiot would have invested in that.

And good for you for exploring the world of the jock from the inside. I will forever view it from the stands (other than that brief time in 9th grade when I played basketball...and I use the term "played" loosely...but that is another blog).

Great Post! I love the pictures. OOOO You were even sexy when you were younger!. Well Seahawks are winning I guess you are enjoying that!

Thanks Cherish. Well I was skinnier when I was younger anyway :)