Mongo and the "Rhapsody in Funk" 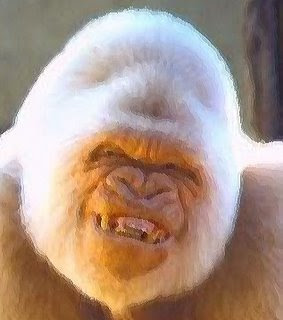 Tim had grown up in Washington and one day picked up and caught a tramp freighter to Africa. He lived there for years, walking (yes walking) from one place to another. He walked in and out of Uganda when Idi Amin was in power. At one point Tim claims to have worked with Dian Fossey studying Mountain Gorillas. I wasn't sure whether to believe him or not. Years later I actually found his name mentioned in a book about Fossey. Whether it was the same Tim White or not is a matter of conjecture.

But if you ever met Tim, you would believe he had worked with Mountain Gorillas. He looked like an ape. He had a full beard and shaggy hair and an infectuous ape grin. I nicknamed him Mongo. He accepted the nickname good naturedly as he did everything that came his way. Yes, I believe Tim was the last of the free spirits and very well could have worked in the mountains of Africa communicating with our ape friends.

I haven't seen Tim for years. Last time I ran into him he had got the crap beat out of him while waiting for a bus in Seattle's Central District. All those years drifting around Africa and he'd never got a scratch. But simply standing on the street waiting for a bus in the states and he was attacked. For their trouble, the muggers got a handful of change. For his trouble, Tim got a a couple of cracked ribs and a concussion.

Tim didn't get much sympathy from the police because, as a free spirit, Tim didn't dress much differently than the transients who had beat him up for pocketchange. I remember the beating affected more than his body. Some of the joyful innocence that always shone in his eyes when he smiled was gone after that senseless act of violence.

Anyway, I never forgot about Tim. His amazing ability to experience what most of us only dream about made a lasting impression on me.

I ended up writing a short story about Mongo. It is called Rhapsody in Funk. It has been languishing away in my file cabinet for years until I rediscovered it a couple of days ago. I've spent the weekend transcribing it and have posted it on my Words by T.E. H**** pages. It is a bit long to read online, so if you are really interested (and I'm sure all of you are dying to read yet another unpublished short story), I suggest printing it out.

Anyway, I dedicate it to my friend Tim White. May you always be dancing the dance wherever you are. I'm sure you are still wearing your grandfather's wool jacket. And I hope you are still smiling that simian grin.
Posted by Time at 1:49 PM

Wonderful post thank you. What an absolute shame what happened to him. How do some humans become so inhumane?

Thank you Cherish. It was senseless. And you pose the universal question. Why are humans so inhumane? Sounds like a good topic for Summerland!

What a beautiful soul you've described... and what a shame that he was treated with such disdain.

Thank you for sharing this story... and I AM going to go read the short story... I'm intrigued.

Thanks Lauren, but I'm not sure the short story does Mongo justice.