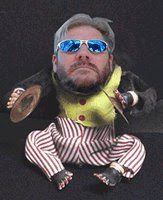 Not that I'm been successful on eBay buying another Monkey Playing Cymbals. Those puppies are expensive. And apparently I'm not the only one trying to acquire a new one.

I suppose I should be content with the one Monkey Playing Cymbals that I have. He is quite a handful anyway. And with the Seahawks going to the Superbowl he has been a little unbearable to be around.

"Wipe that stupid grin off your face," Monkey I say (but not too loud since I work in a cubicle environment). But he just sits there mocking me because I didn't get season tickets this year (I haven't told him about the big screen TV).

Plus, he is supposed to be a muse and he can't even keep his own Blog up to date. Half the time he simply mimics what I do (monkey see, monkey do...). And honestly, I don't really care much for bananas and that's pretty much all he eats.

You know, sometimes I feel like just walking out on him. I mean, I really don't need a Monkey Playing Cymbals to inspire me. He stars in one bad movie and he thinks he is better than me.

When it comes down to it, I think he really needs me, though. And it is nice to be needed.

Sometimes he really does get on my nerves, though.

That picture is amazing!

I kind of understand what you mean, I collect carousel horses. I am not sure why they talk to me but they do. I am not into horses, carnivals, circuses or anything like that but boy do I love carsousel horses.

Bless you Cherish! No one else seemed to appreciate my monkey photo. I'll keep you posted on finding a match for my monkey.