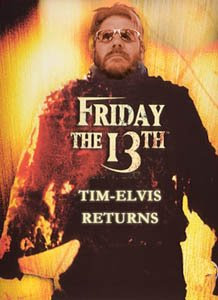 Whatever the history of Friday the 13th(the day, not the movie) is, it will now be forever tied to Friday the 13th (the movie, not the day). I remember seeing the original movie back in 1980. It kind of set the standard for that genre of slasher films with psycho killers that couldn't be killed. Though I think John Carpenter's original 1978 film, Halloween was a better film and Michael Meyers was a better defined character.

But this is Friday the 13th, after all. And Jason rules on Friday the 13th (the day and the movie). Which leads me to my latest bit of brain flatulence. I think Jason is one heck of a role model for perseverance.

I always thought the cool thing about Jason was that you could just about do anything to him and he'd pop right back up and keep on going like the terminator or the Eveready Bunny. He is kind of the Timex watches of movie monsters (takes a licking and keep on ticking).

Doesn't this teach us something (other than the importance of pretty good safety gear)? Yes, of course it does. If you are already dead, no one can kill you. Heck, Charlie Manson figured that one out.

I think it is pretty darned inspirational. I mean, Jason drowned as a child and came back. He was burned, stabbed shot, blown up and he continues to make movies. Even Dirty Harry doesn't have that kind of a track record.

So on this rainy Friday the 13th, I just want you to pause and reflect on the bad things in your life and then consider Jason's basically shitty luck. If he can hang in there after being killed so many times, so can you. Just a thought.

The symbolizm of bad luck is relative. I joined the Navy on December 13th. The number of my company in boot camp added up to 13. We lost 13 recruits for various reasons before graduation day. The submarine I ended up on for most of my tour was designated SSN661.......add it up. The FIRST sub I was assigned to and was transferred off of to the second later ran into an underwater mountain and was almost lost. 13 has been very, very good to me.

So the michael, are you telling me that you are the real Jason?

You know Tim, you may be on to something here. I mean you never see The Micheal and Jason in the same place. And the name, Michael, just like the villian in Holloween. Typical bit of misdirection there, trying to throw us off the scent. I think we'd better keep an eye on this, so called, "Michael"

Hoping You survived Friday the 13th Tim. And have a nice weekend too! Still lovin Your blog,
~gina~

Lights, that is true. Then again I've never seen him anyplace. He may not even be real.

And thanks Gina, it is nice to be appreciated. :)

Jason rules!!! I swear I use to love all those movies until I had kids. Now I can not watch anything scary. I miss that adreneline rush of being scared half out of my wits. Now I think Freddy was scarier than Jason and Michael put together!!

I hope you had a great weekend!

I think Freddy was an amateur compared to Michael or Jason, but just my opinion. Anyway, Go Seahawks!